Very few people think about their septic system until it’s too late. Dyer Septic & Excavation can help with the needs of all residential homeowners and commercial businesses. With 24 hours a day, seven days a week, 365 days-a-year coverage, the team at Dyer can help build a new system, fix an existing system or do routine maintenance.


Run by Rick Dyer, Pam Dyer and Nick Dyer, Dyer Septic has been in business for more than 40 years. The company started with a backhoe installing tanks, before Rick began pumping with an old fire truck. Eventually the company expanded and now Nick, the son, does the septic work and Rick still works the excavator.

“We offer septic tank pumping, emergency services and tank locating,” said Nick. “It’s a septic
company. It’s not glamourous. It’s something that has to be done.”

From installing new systems and septic pumps to baffle instillations and excavations for foundations and driveways, Dyer Septic & Excavation can do it all. With one stop shopping, they can help residential and commercial customers get into a routine that will insure that the project will be done right the first time and have proper upkeep in the future.

“People who don’t get their tank pumped eventually will call us with problems,” said Nick. “They get into a routine because they don’t want it to back up into their house ever again.”

Dyer Septic & Excavation covers 30 towns in the Sebago Lake and Oxford Hills regions. The 10 employees, with 20 plus years of experience each, work as teams to meet the needs of their customers.

“There’s high demand in the field for trades for people who want to work,” Nick said.
Pumping is scheduled Monday through Friday, but emergencies are 24/7/365.

“We come out whether it’s Christmas or the Fourth of July,” Nick said. “We like to think we have the best service and most competitive rates.” A tank up to 1,000 gallons, which are the most common tanks they pump, costs $225. “It’s the lowest around. We do a lot of service when we are there: filter cleaning, clear blockages, root removal, tank inspection and snaking the line at no additional charges.

The excavation side of the business can dig any hole or help with projects like foundations, installing risers for tanks that need to be moved closer to the surface, and driveway preparation.

“We’re one company that can come routinely to help you out and come back and fix everything, tank, pump and leach field. We can come help you out,” Nick said. “I’ve been to some tanks that have five inches of water left in a five foot tank.” That’s not a good situation. He’s also seen animals and tree roots in the tanks. After pumping a laundromat’s tank, they found four IDs and money to name a few things. 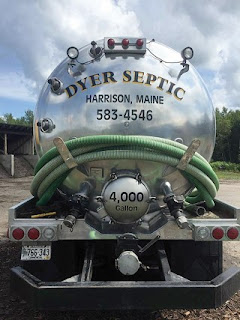 The teams at Dyer are very responsive to phone calls. They are almost always available to answer the phones or will be sure to call a customer back soon after a message is left. “Word gets around if you’re good, or bad,” Nick said. Usually appointments can be booked within the week or that very day.

The company stands out from its competitors because it is fully eco-friendly. They use DEP certified tanks to treat the waste brought in to their facility. All the solids are then treated to make compost. The composting and water system they have makes them able to be more competitive in the marketplace.

“Half the job is educating people,” Nick said.

A family of four should have their septic tank pumped ever three or four years based on use. “If they party every weekend with friends, they might need it more,” said Nick. Seasonal camps might only need to be pumped every four or five years.

For more information or to book an appointment, visit www.DyerSeptic.com, or call 583-6015 or email DyerExcavating@roadrunner.com.

Posted by The Windham Eagle at 6:32 AM