Tucked in the woods on the Raymond/Casco line is the 80 acre Sabre Yachts facility where 123 direct laborers create high end pleasure crafts. The 45-year-old company believes in quality above all else and the satisfaction of the customer is important. 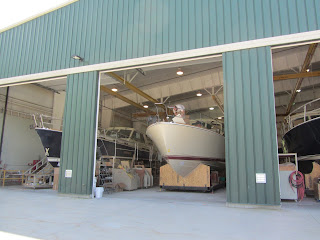 Sabre started in 1970 building 28-foot sailing yacht “using production line methods and fiberglass technology.” When the market began to change in the early 2000s, Sabre began introducing power boats into the production line. Now they build power boat models from 38-feet to 54-feet in length with a 66-foot model in design to be built in 2016. They build the last Sabre sailboat in 2012, however they did purchase the very first sailboat every made by Sabre and have special plans scheduled for it. Ed Miller is the chairman of the company and Daniel Zilkha is the CEO.

“It’s the incredible people that make this company,” said Don Wentworth, production manager, who has been with the company for 33 years and worked his way up from an entry level position. “It’s a safe and rewarding work environment. Life’s too short not to get a kick out of what we do.” The six supervisors all started on the line and two of the five in house engineers worked their way to those jobs. 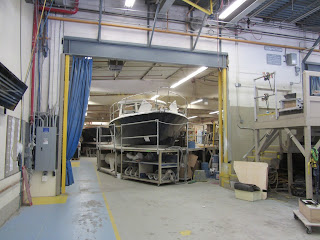 “All product development from conceptual to in the water are designed in house,” said Wentworth. Every step of the manufacturing process is in charge of quality control. Sabre receives the raw materials and the employees then work their magic. “Everything is hand built, it’s a true craftsman shop,” he added. When a cabinet or furniture is built for a boat, the builder makes sure that the color grain is consistent, that it’s all from one tree. It’s the little details that make Sabre unique. “It’s a finely choreographed dance,” Wentworth said, describing the way the production line works. The employees receive validation and certifications in their respective positions.

The hulls are made in Raymond using a state-of-the-art, VIP resin infusion technology.

Sabre is an American company. The employees have a bit of arrogance when it comes to what they build. “They guys don’t want to think that anyone can do it better and I think they’re right,” said Wentworth. 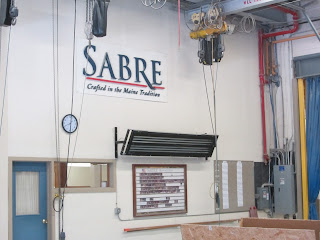 The company is growing and advertising for motivated workers who have experience or can be trained. They are hoping for people with applicable skills and anyone with a residential/commercial background in plumbing, electrical, auto body trade all transfer well to the Sabre production line, as do people with experience in the marine industry. If a person has the norms and values Sabre is looking for, they will teach them a trade. 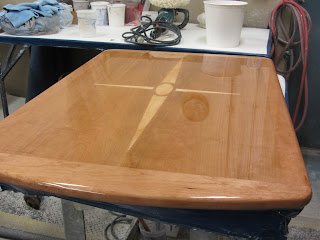 “The longer the people stay here, the better the boats are,” said VP of marketing and sales Bentley Collins. Sabre offers 401Ks, dental, eyewear, college education funds and scholarship programs for its employees. Thus Sabre has an average tenure of 10 years. “It’s really important to Sabre Yachts that our neighbors want and like us where we are,” Wentworth said. “Maine can be a tough place to do business. We attempt to provide secure career opportunities in an area that’s not at the top of the list when you think about that,” he added.

Sabre Yachts are purchased through dealers all over the world. The boats are being exported to Europe, to Japan, Australia and Canada. The way that the production line works is that there is no slow or busy time. They are building boats for someone specific or building them for dealer stock. “It makes for a stable production flow,” said Wentworth. 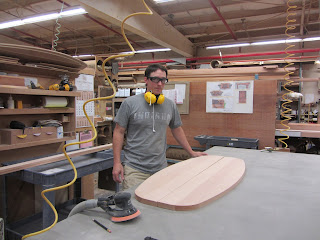 When dealers take possession of the boats, they do the last bit of completion, like add a fly bridge and connect wires. Every system is checked and run in the shop before it is shipped. 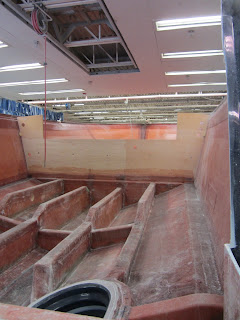 Sabre bought North End Composites of Rockland, Maine in 1995, and employs 200 people there under the company Back Cove Yachts. Most of the larger sized boats are produced at that location as well as 30- to 41-feet in length, however the mill work and components come from Raymond.

Sabre has tremendous repeat customers, said Wentworth. Customers like the history and the handcrafted interiors, Collins added. If someone were to purchase a 38- or 42 foot boat today through a dealer, it would take about 9 months to have it to the customer, Collins said. It would take until September 2016 for a larger boat. 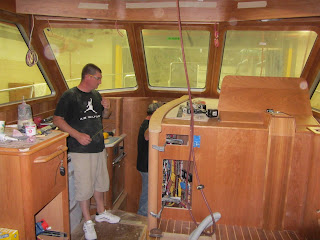 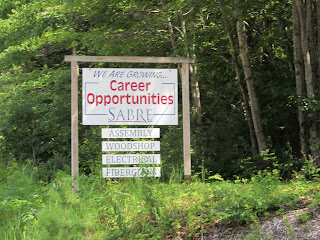 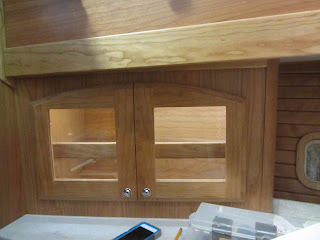 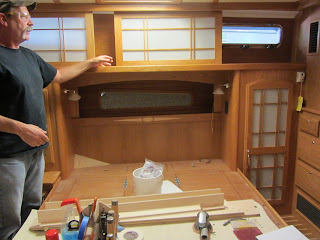 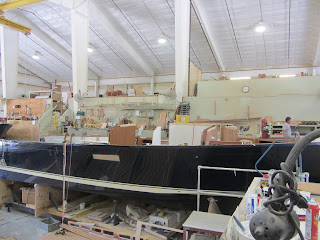 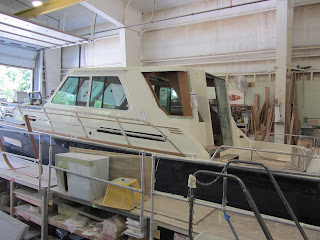 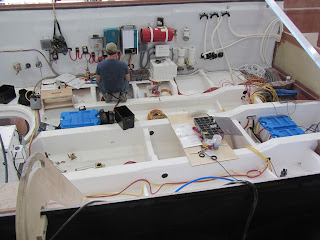 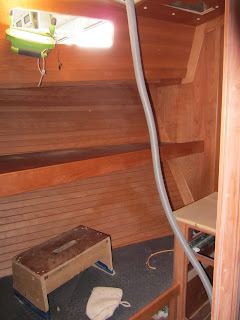 Posted by Michelle Libby at 1:39 PM