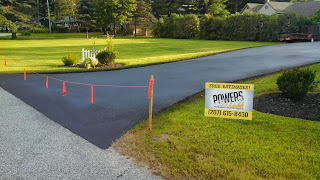 Jon Powers grew up in Windham and when it came time to start Powers Pavement Maintenance last spring, he started it in this area. “It’s a family owned and run business,” he said.


Having an entrepreneurial spirit has helped shape his success from the halls of the REAL School, an alternative learning school under the management of RSU14, to starting a company, it has been that drive that has allowed him to be his own boss.

“We love being outdoors. I love leaving a job site and seeing what we’ve created,” Powers said.


Powers will travel from Biddeford to Turner, Bath to Oxford to fix or protect someone’s driveway. He also gives free estimates.

“When we sealcoat, we’ve increased curb appeal to a business, made a parking lot safer and we’ve given more life and time to their driveway,” Powers said.

Powers grew up working in the construction industry as an equipment operator. He also worked at Benson Dairy Farm in Gorham while he was in high school. “(The REAL School) was one of the best experiences of my life and I was very fortunate to go there. There were so many opportunities for me. They knew I wanted to be an entrepreneur. They helped me with that,” Powers said. 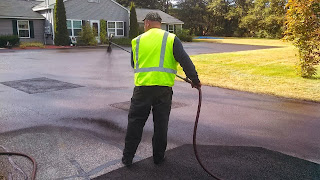 Powers is competitively priced because they have lower overhead than a big company and when they give an estimate it is the word on price. Powers said they don’t change the price midway through a project.

As far as growing the business, Powers is happy with a small family-owned company. “I’m on every job site doing the work with my employees. I see that every job is done correctly. Our goal is to keep it on a small scale, less corporate and more family-oriented.” When customers call Powers Pavement Maintenance, they reach the owner. “They call my cell directly and they get me directly, not an answering machine and not a secretary,” said Powers.

In the winter, Powers plows and sands commercial and residential properties. He also provides infrared patching, which can be performed in the winter on parking lots, for example.

For more information and to see pictures of jobs Power’s has completed, visit Powers Pavement Maintenance on Facebook or call 615-8430. Estimates are free.