No one likes to find a tick on them, but a local company has made educating the public about ticks and tick-borne diseases its job. Mainely Ticks located in Windham and Sanford treat properties for ticks, but also make sure people know how to protect themselves and their children from contracting Lyme Disease. 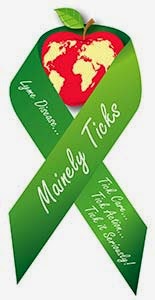 “We are trying to raise the level of awareness,” said co-owner Bob Maurais. “Seventy-five percent of all Lyme is contracted 100 feet from the home. It’s in your back yard and neighborhood.” Deer ticks, the ones that cause Lyme Disease, are in the “leaf litter” around the edge of yards, said Maurais. Ticks can’t live in direct sunlight.

The company began when Maurais’ nephew in Connecticut started a business spraying for ticks in 2004. Seeing that ticks would become a problem in southern Maine, Ed Maurias, Bob Maurais and George Bennett started Mainely Ticks.

Bob Maurais concentrates on the education part of the company and now ships tick ID cards and bookmarks throughout the country. Mainely Ticks employees eight people.

Personal protection is important for everyone, he said. “Prevention is the best prescription.” Maurais recommends that everyone have their clothes they wear outside treated with Permethrin spray, which is good for five to seven washes, or send them to a company in North Carolina that treats clothing and will last for 70 washes. Permethrin spray can be found at Walmart in the sporting goods section. He also recommends that people wear DEET on exposed skin. “It doesn’t have to be 100 percent,” he said. Twenty to 30 percent will do.

“Kids need our protection,” he said. “Ages five to 14 have the highest incidents of Lyme Disease.” Maurais stressed that it is a parents’, grandparents’ or adults’ job to do a nightly tick check. May, June and July are the crucial months to do checks at bath time and throughout the day. Using fingertips, feel through hair and check behind ears for poppy-sized ticks.

“Children really need and deserve our protection. They are the most vulnerable,” Maurais said.
If a tick is found, don’t try to smother it with lotions, don’t squeeze it, instead use fine-pointed tweezers to gently remove the tick from where it is attached. For questions and reference, directions are available on the www.mainelyticks.com website.

In 2005, Maurais’ wife, Barb was diagnosed with Lyme Disease, making the work more personal. Now, people are beginning to get sick with Lyme Disease co-infections. The CDC estimated that there are 30,000 cases of Lyme per year, until 2013, when they recognized that they underreported the number by 10 times, meaning that many cases are misdiagnosed or under diagnosed, said Maurais.

In Maine, 1,400 people were reported to have Lyme Disease, but according to the CDC findings that means that “there are 14,000 people in the State of Maine who don’t know they have it and wonder why they feel so terrible. That’s scary,” he said.

Pets transport ticks and are 50 percent more likely than humans to get Lyme Disease because they are right down at the tick level.

Lyme Disease is hard to diagnose. Only 50 percent of people get the bull’s eye rash. Most get one or all of these symptoms, fatigue, joint pain, brain fog, ocular issues, heart issues, neurological issues and Bell’s Palsy, said Maurais.

Ticks are not born carrying Lyme, they get it after their first blood meal. After that they can transmit the disease to humans.

For more information about ticks, tick-borne illnesses and ways to protect loved ones, visit www.mainelyticks.com.

Posted by Michelle Libby at 9:41 PM