Windham is a town rich in history with deep agricultural roots.  Agriculture is alive and well in late winter and early spring on two Windham farms.  The maple harvest is in high gear at Cooper’s Maple Products and at Nash Valley Farm.  Both farms will be hosting Maine Maple Weekend on March 26 and 27 and invite you to come on out for a maple experience.

The Cooper’s and the Morrill’s of Nash Valley Farm are longtime friends. Their families have been part of the Windham agriculture community for generations. Mark Cooper and Richard Morrill grew up in Windham, returned after college and have raised their families here. Both farms raise beef cattle, make hay, and produce maple syrup. The Cooper’s also raise chickens, horses, along with greenhouse plants and flowers. Farm life has many advantages such as a busy schedule where no two days are the same. The intrinsic rewards are the best – a wholesome way of life for the entire family, seeing the next generation coming along with an interest in helping on the farm, stewardship of the land and open space in a rapidly growing town, and the joy of offering high quality products to a loyal customer base. 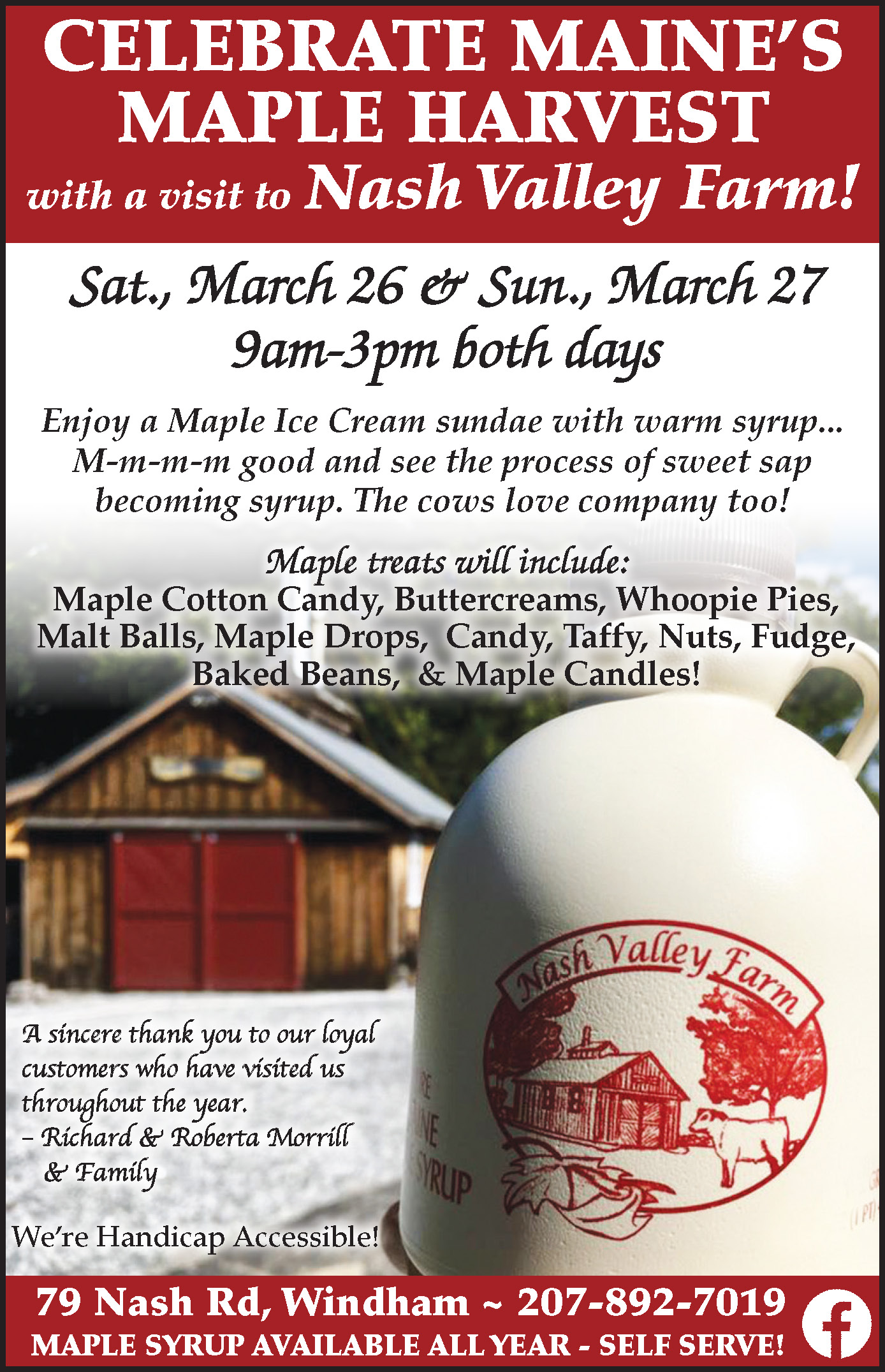 At Cooper’s Maple Products, syrup production started in 1988 with about 40 taps and boiled on a wood stove. That spring, an old 2 x 8 Vermont evaporator was purchased, and plans were made to build a sugarhouse. The sugarhouse was completed in 1989 and 350 trees were tapped, and a maple license was secured.  1989 was the first Maine Maple Sunday at Cooper’s.  There were maybe a couple hundred visitors and they were off and running.  Now they are at 2,000 taps and several thousand visitors over two days.

A couple of Mark’s favorite parts of making syrup are working out in the sugarbush to put up new tubing and lines or tapping trees.  You’re busy but it is a nice peaceful place -  just you and Mother Nature.  The other favorite time is boiling and making syrup.   Boiling is typically done in the evenings when Mark boils alone most of the time. If things are going well, it is a nice smooth rhythm of adding wood to the fire, checking syrup density to draw off, and filtering the finished product.  Sometimes it can make for some very late nights but it’s always well worth it. 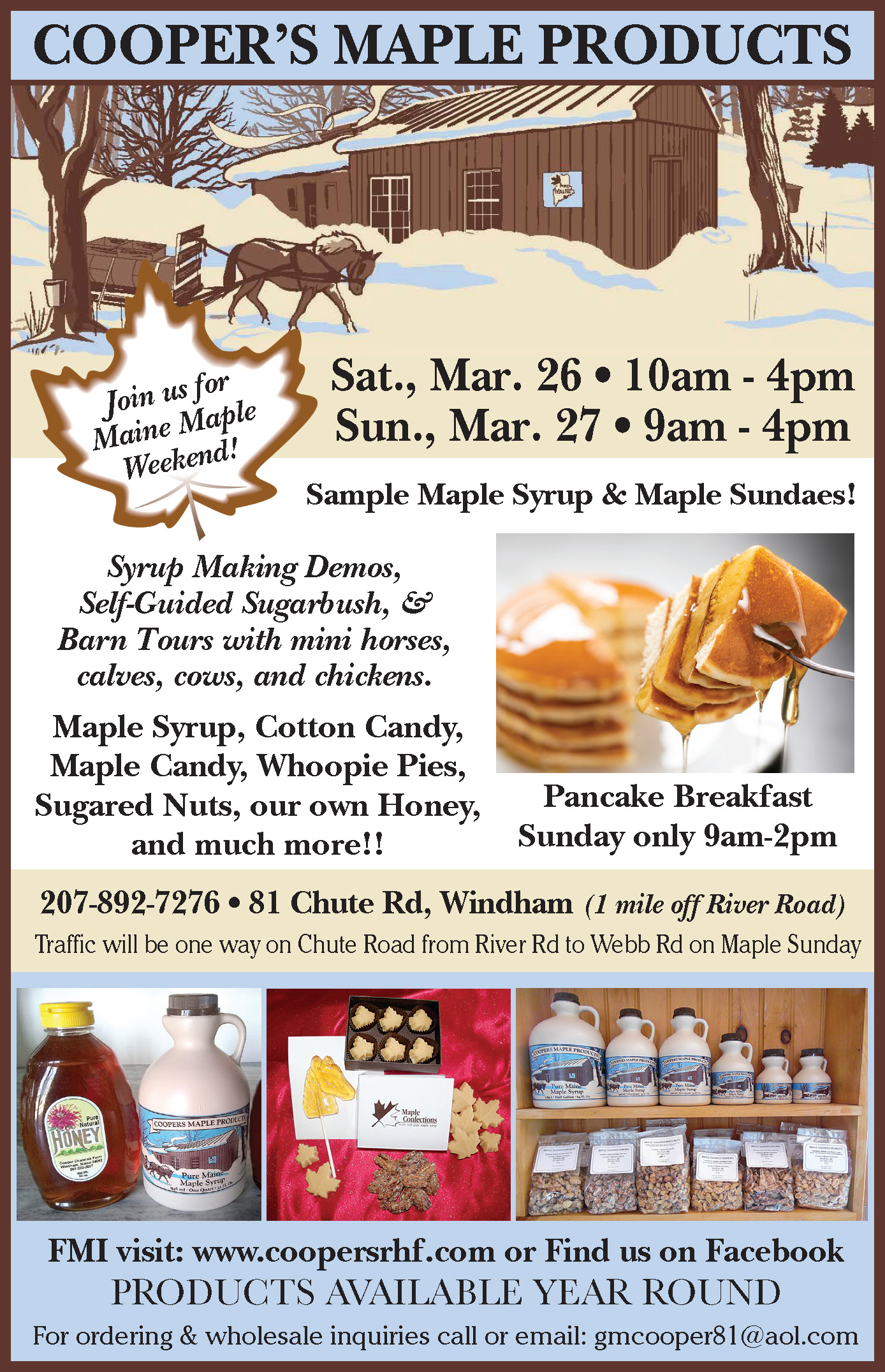 Both Mark and his wife, Gaylene, enjoy Maine Maple Sunday and all the visitors to the farm. Although there is a huge amount of work involved to pull off the event, they feel truly blessed with some great family and friends to help make it go smoothly.

Richard grew up on the Seven Maples Farm that sits next door to the current sugarhouse.  He looked at many large healthy maple trees for years and always wanted to tap them.  There was much to do on the farm and never time to experiment with sugaring.  He decided to give it a whirl in 2001, putting buckets on a few trees and boiling on a homemade evaporator under a blue tarp.  The nights were long, the boiling was slow but the syrup was darned good - so good that he decided to do it again in 2002.  He was hooked and a sugarhouse was built that summer.  He equipped the sugarhouse with a used G.H. Grimm 2 x 6 evaporator for the 2003 season.  Nash Valley Farm hosted its first open house in 2003 with 19 visitors.  Everything has grown since then  -  the sugarhouse has an addition, the equipment has been enlarged and new tools have been added, the number of trees tapped has increased and thus, so has the amount of syrup made.

Richard finds that maple season brings purpose to the time period between winter and spring, making the mud more tolerable.  Working in the woods is peaceful and can be a great physical workout depending upon the amount of snow.  Becoming a part of the maple industry has given Richard and his wife Roberta many reasons to explore sugaring from Maine to New York.  They have made many life-long friends in the process.  Like the Cooper’s, the Morrill’s family and friends are a huge part of the annual maple open house.  They are very grateful to all of them for their help as it just couldn’t be done without them.

Maine Maple Weekend provides an opportunity for these sugarmakers and their families to greet visitors and share their knowledge about maple syrup.   Seeing a food product made right before your eyes is quite an experience.  Knowing where your food comes from is peace of mind.

Maple syrup, once thought of primarily as a pancake topping, is becoming a staple in the kitchen today with its healthy properties and wide variety of uses.    Maple Syrup is healthy because:

-  it has the same calcium content as whole milk

-  it is rich in minerals such as calcium, potassium, manganese, phosphorous and iron

You will find cookbooks at the open houses with recipes that use maple for every-day foods.  Many are surprised to learn that Maine Maple Weekend isn’t the only time to stock up on maple products  -  it is available all year long!!

There is no better way to experience maple than at a Sugarhouse during Maine Maple Weekend.  So, stop in and visit Mark and Rich on Saturday or Sunday to get a taste of the natural sweetness of spring.  It’s good for you!