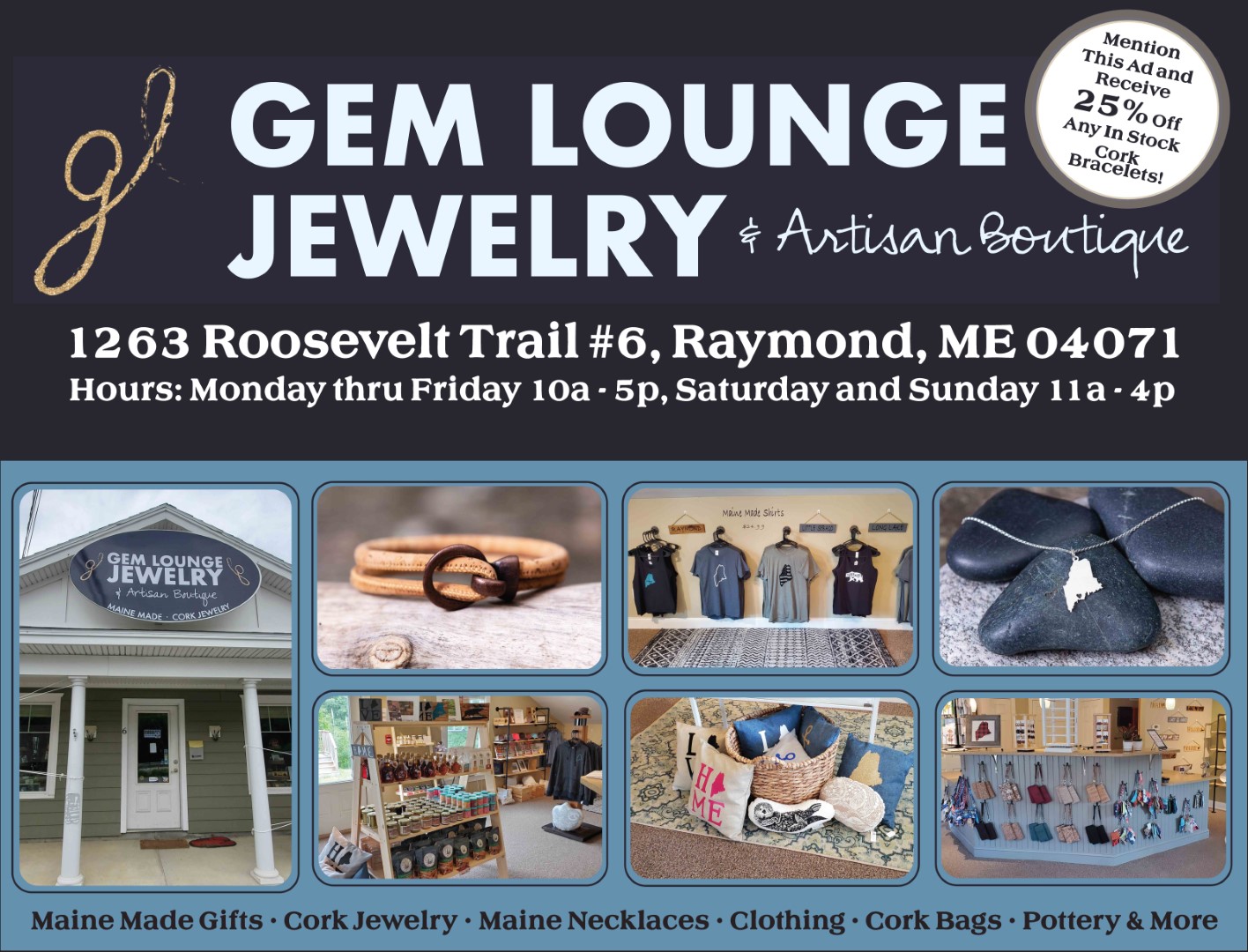 There are many things that make Gem Lounge Jewelry, located at 1263 Roosevelt Trail in Raymond a fashionable Maine jewelry and other locally made gifts such has handbags, t-shirts, and journals but its commitment to the burgeoning eco-friendly movement has made waves beyond the Lakes Region area.
unique retail jewelry shop that stands out among the rest. Not only is the store filled with

Upon entering the Raymond store, one will find beautifully hand-crafted vegan leather jewelry with designs that all feature genuine metals, gemstones, cork and more and are made with sustainable and recycled supplies and packaging. “The result is beautiful artisan designs that you can feel great about wearing,” stated Owner and Jewelry Maker Extraordinaire, Melissa Evans.

So, what is cork? Cork is generated from the bark of cork oak trees. The bark is stripped from the trees every nine to 12 years to make sure that the trees are not over stripped. The stripping does not damage the tree itself and allows the tree to grow to over 200 years old.

Over 85% of the world's cork comes from Portugal, which is where Gem Lounge Jewelry source the materials for their designs. What is created is a great sustainable product which unlike traditional leather designs, uses no animal products to produce.

Gem Lounge Jewelry prefers to use cork in their designs as the benefits include an eco-friendly alternative to leather, it is hypoallergenic, and best of all, water-resistant. The idea and concept came from her younger sister. “When my sister turned 15, she started a vegan diet,” began Melissa. “She challenged me to make her a vegan leather bracelet. I rose to her challenge and that is where our cork designs were born.”

Melissa went on to explain that one of her realizations regarding eco-conscious jewelry and handbags was that it would put her in the forefront of an important movement. “The plant-based direction we are embracing is more than fad-based, it’s a movement that is gaining momentum and will not be disappearing anytime soon,” she said.

That’s not the only movement Gem Lounge Jewelry supports. Over 90 percent of the products sold are Maine made. Buying and selling local products is Melissa’s mission. In fact, apart from going away to college in New Orleans at Loyola University where she lived for four years to obtain a degree in Political Science and Marketing, Melissa herself is local.

“I grew up here in the Lakes Region, first living in Gray and then moving to Casco until I was 17 when I moved to New Orleans,” she explained. “I now live right here in Raymond, just a few miles from the store. I’m an eighth generation Mainer. I am about as local as one can get.”

Prior to finding her role as entrepreneur and jewelry maker, Melissa worked in a variety of professional roles in highly regarded Southern Maine companies that put her in an office setting. “I eventually realized the cubicle life wasn’t for me,” she said.

First using jewelry and handbag making as a creative outlet from her “day job”, she realized she needed to make the shift in order to be fulfilled in life. She made the transition from her office work to crafting her business ten years ago and it has been growing ever since – supplying her fashionable Maine jewelry and other locally made gifts to over 90 store locations across the U.S.

Melissa and her business, Gem Lounge Jewelry, caught the eye of the Portland Press Herald where she was highlighted for her unique style. She was also interviewed by Channel Eight news. The exposure increased awareness about her unique vegan-based focus, creating an expansion of her business in Southern Maine and beyond. It was at that moment she realized she needed to go from a homebased business to a storefront.

“It wasn’t until a man who drove from Berwick to Windham at the address where I have my PO Box at the Windham UPS store that I realized I needed to take the next step and have a physical location to sell my jewelry and handbags,” Melissa said. “It was around Valentine’s Day and the man had driven a total 2 ½ hour round trip to purchase a piece of jewelry for his wife. He called to ask me where I was located. He and his wife had seen me on television and his wife was very interested in what I had to offer. When he called from the Windham UPS store, I asked him what he was looking for. I met him at the Hannaford parking lot with the piece of jewelry his wife wanted. He went home with the gift he had in mind.”

Other similar incidents continued to occur. As a result, on June 29, 2019 she purchased the former Essentials store location and now has a storefront to display her unique locally inspired and eco-conscious jewelry, handbags and other gifts at 1263 Roosevelt Trail in Raymond. Gem Lounge Jewelry is opened seven days a week. Hours are Monday through Friday, 10 a.m. to 5 p.m. and Saturday, 11 a.m. to 4 p.m. For more information, peruse the website at www.gemloungejewelry.com or call Melissa at 207-302-0009.

Posted by The Windham Eagle at 1:03 PM