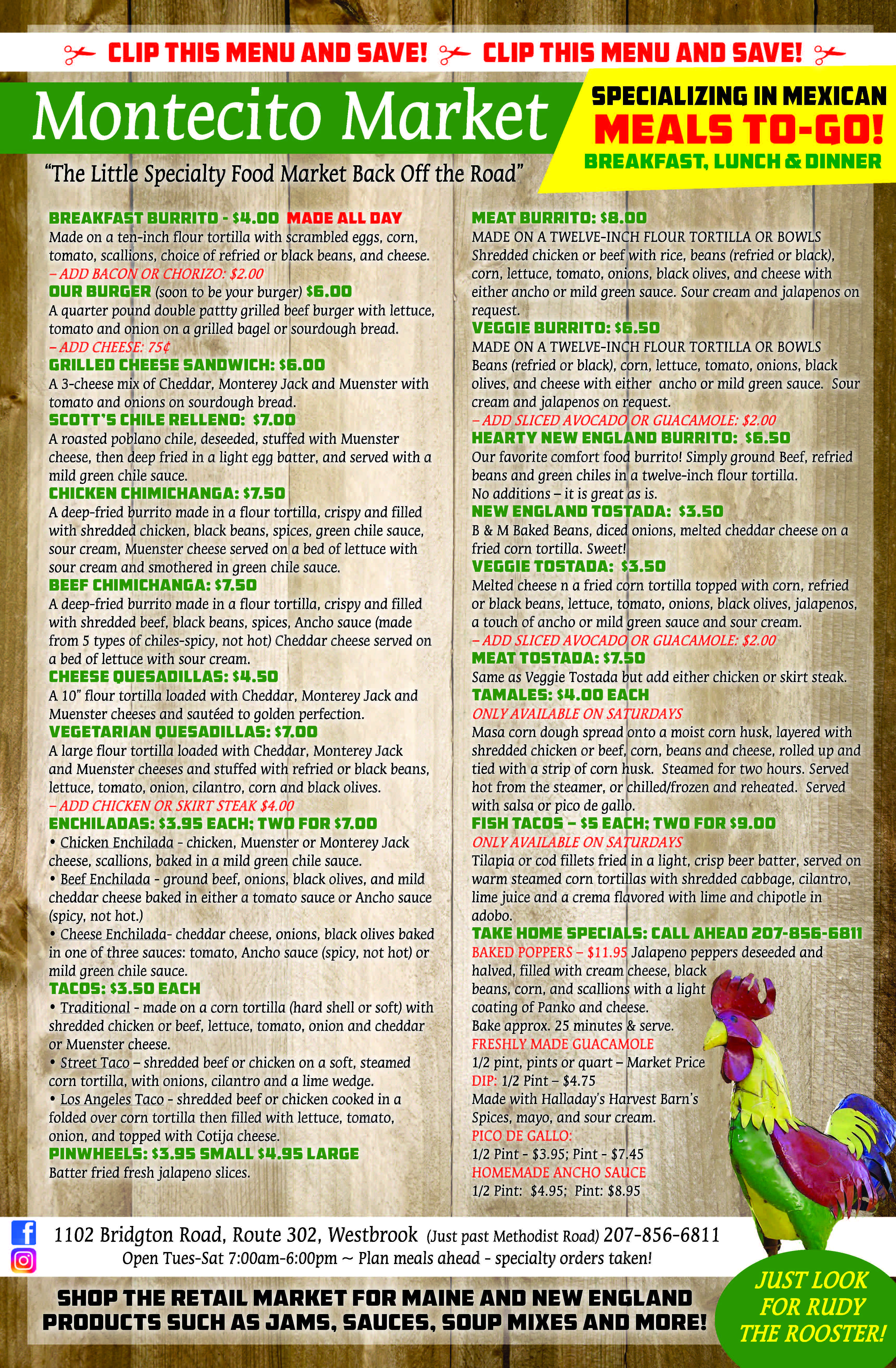 If you drive along Route 302 between Windham and Portland, you’re in for a treat!

Montecito Market, a newly opened store offering take-out food located at 1102 Bridgton Road (Route 302) in Westbrook, offers a plethora of delicious treats to brighten your commute. Even if you haven’t yet set foot in Montecito’s bright and sunny market, you’ve probably noticed Rudy the Rooster, the enormous rainbow-colored rooster statue proudly standing at attention in front of the market.

“Everyone loves Rudy,” Julia Havers, co-owner, tells me, explaining the colorful statue is part of their new social media marketing strategy. “If you stop by to take a picture with Rudy and post it on our Facebook or Instagram pages, we’ll give you a free 8 oz. bag of Montecito Roadhouse tortilla chips.”

Twenty years ago, Julia and co-owner/husband Scott Rehart moved from Santa Barbara, California to Portland in order to be closer to Julia’s family. Julia began work as a clinical social worker at Maine Medical Center, and Scott decided to rent a “day table” from the now-defunct Portland Public Market.

“We’ve always loved Mexican food,” Julia tells me. “Every time we went out to a restaurant, we’d choose Mexican. But then I would say, ‘This isn’t half as good as what you can make at home.”
Scott’s rented “day table” at the Portland Public Market included a microwave oven and an array of enchiladas displayed on tubs of ice. Scott baked his enchiladas at home, set them on ice, and allowed customers to warm them in the microwave.

“I sold out the first weekend,” Scott says. “Then I sold out again the second weekend. By the fourth weekend, I decided I wanted a permanent stall in the market.” Scott operated his El Mirador Mexican Deli at the Portland Public Market for six years.

“I made tortilla chips like we did growing up in California, and just tossed a handful on the combo plates. Customers began requesting them by the bagful. I had a customer who liked my El Mirador chips so much she brought bags to the Cape Elizabeth IGA,” Scott recalls. “I should have given her a finder’s fee for securing the account! Our chips are still sold at that IGA only now as Montecito Roadhouse.”

Scott and Julia bought the property on 302 which had formerly been Westbrook Pool and Spa. After renovating the building, the couple is looking forward to growing their Market. It features Montecito Roadhouse tortilla chips, as well as a wide range of take-out meals and other local products, from maple syrup, mustards, salad dressings, spice packages, cheesecake and lava cake mixes, to hot sauce and salsa.

“We’re trying to showcase other Maine-made products”, Scott says, “since we recognize how much hard work is behind it. There is a real respect and appreciation when local vendors go out of their way to visit and get to know their customers.” Julia has enjoyed meeting the owners of Mother’s Mountain, Jarva Cakes, Raye’s Mustard, and Coopers Maple Products.

Montecito Market’s take-out menu includes Mexican favorites such as chile rellenos, burritos, and the same enchiladas that were so popular when Scott set up his first “day table” at the Portland Public Market. However, the menu also includes other comfort foods.

“That’s part of what makes us special,” Julia explains. Chicken pot pies, Tennessee meatloaf, lasagna, macaroni and cheese, and a range of soups and chilis join the Mexican meals in their take-out menu, ensuring that Montecito Market will have a delicious meal to please whomever is waiting for you at home!

Scott tells how the couple drove through Louisiana a few years ago and stopped at Café du Monde, a New Orleans landmark that specializes in beignets, the state donut of Louisiana.  Returning to Maine, Scott began making his own beignets. He is making them at Montecito Market both plain, and with various fillings including crème brulee, cream cheese, and jalapeno jelly that he makes at the Market. In the name of journalism, I made sure to sample a beignet. It was delicious enough to make me wish my morning commute followed 302!

When I asked if he missed the Santa Barbara sunshine, Scott laughed. “The sunshine gets boring,” he said. “The weather is always the same in California.”

“We do have a lot of people comment after eating Scott’s food, “This tastes just like California!” Julia adds.

We may not have Santa Barbara's sunshine but, thanks to Scott and Julia’s Montecito Roadhouse, southern Maine can now have a taste of California!

Montecito Market has had a soft opening to meet their neighbors and invites you to its Grand Opening this Saturday, October 27 from 8 a.m. to 6 p.m. For more information, contact Julia and Scott and 207-856-6811 or follow them on Facebook.