With all the building shows on TV, homebuyers are more particular about what they want their home to look like, be it a starter home, a home for a growing family or a one-story retirement home. MGM Builders in Windham designs and builds custom homes and has since 1987.


“We are celebrating the 30th anniversary of our first house in Raymond,” said general contractor and founder, Mike Manning.

“We are family run.” Mike’s wife, Anne, and sons Taylor and Ben are all involved in the business. Taylor has a degree in building and is the project manager as well as a finish carpenter. Ben will end his job in the Navy in May and will join the company brushing off his degree in construction management. Tessa Manning, Mike’s daughter-in-law, runs the publicity and online arms of the business. Co-founder Anne Manning is a home design specialist as well as a Realtor®.

“We are a custom builder, there’s a big difference,” said Mike. “Custom takes a lot more attention. It might take four or five months to complete a house depending on the size.”

The majority of homes built by MGM Builders are in the greater Windham area, Gorham, Falmouth, Cumberland and Raymond. Close to 100 of the 200 houses built by MGM Builders over the years were built in Windham. They’ve built homes for repeat customers who outgrew their home or wanted to build a retirement home. They have also done major remodels of houses for clients.

“What we enjoy the most is new construction,” said Mike. The company’s latest project is off Windham Center Road at Green Acres, where MGM Builders is developing land. They bought the land from the late Earl Green. His children wanted to keep the land in his father’s name and Green Acres was born. 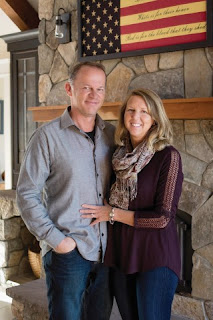 Over the 30 years Manning has been building homes, the technology and the equipment have changed making turnaround times faster, with the convenience of being able to call a subcontractor at a moment’s notice.

“To build houses and do it with little problems, you have to have a passion,” said Mike. “I’ve always had a passion.” The first house he built came from a drawing he did at 16 years old. He worked as an electrician in the Coast Guard before he was able to build that house at 24.

MGM Builders works with real estate professionals all over the area looking for building packages. “We make it pretty painless to the customers. They show up at closings,” said Mike. MGM Builders purchases the land and builds the home before turning the entire project over to the new owners.

They have built some commercial projects like the North Windham Veterinary Hospital, which was very challenging, but fun to build, Mike said.

Mike has preached to his sons that “your name is valuable.” MGM Builders stands for quality and integrity. “Our company is about what our customer is asking for and giving it to them,” he said.

His philosophy is “perfection within reason; not production no matter what.” He tells his eight employees to do it the right way the first time or they’ll have to redo it the way he wanted it in the first place.

MGM Builders has built eight houses for the Mannings over the last 30 years. They’ve raised three children in those homes and are proud of what they have built with their company.  “We have a really close family,” Mike said, mentioning that his oldest child Whitney raises two little kids, but doesn’t work for the company, yet.

The company keeps up with what popular trends are, like sliding barn doors. “We are in tune with what the Millennials want,” said Mike.

Customers are looking for open floor plans, mudrooms with built-ins, three bedrooms, and two and a half baths with one being a master bath. They are looking for amenities in the homes, according to Mike.

“We’re passionate about what we do. And we do it with character and integrity. We’re never going to be perfect, but it’s how you fix your issues, fair and reasonable, that makes the difference,” Mike concluded. “We just want to do a good job and have people be happy at the end of the day.”

Find MGM Builders on www.Houzz.com, Instagram and Facebook, or visit www.MGMBuilders.com, call 892-1019 or email Mike@MGMBuilders.com. They are located at 8 Turning Leaf Drive next to Buck’s Naked BBQ.

Posted by The Windham Eagle at 2:00 AM