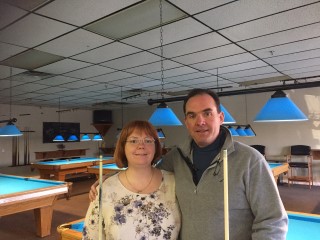 When looking for something to do all year round, check out Take a Break Billiards at 824 Roosevelt Trail at the end of the plaza. Last month Craig and Michelle Newton took over ownership of the business, changing the name and sprucing up the place with new competition blue felt for the tables and a whole new menu just for starters.

The billiards hall was originally Sebago Lake Billiards, then Sneaky Pete’s Billiards and then Daddios, each one having an issue that caused it to close. The Newton’s are ready to make Take a Break a house hold name and the first thing families think of when looking for some place to go to for food, family and fun.
“It’s an inexpensive way to spend a weekend,” Michelle said. Table rentals are $8 for an hour. “Anyone from age 7 to 107 looking for good clean fun,” should stop by, she added.
New televisions in each corner of the hall, means no one will miss a game, be it hockey, basketball, football or baseball. 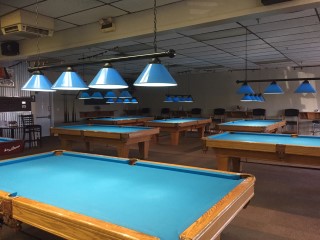 The new menu features pub food, like chicken fingers, fries, mac and cheese, hot dog baskets and more. They are still tweaking the menu to meet the needs of the players and the families. There will be specials, like the Saturday night special which includes two large pizzas, four sodas and an hour of table time for $25.
“We jumped in with both feet,” Craig said. “Guys who are into pool are going play every day.” He was surprised how many people didn’t realize there was a pool hall in Windham. They plan to remedy that issue by offering family fun and a professional grade establishment.
There are American Poolplayers Association (APA) league competitions going on a few nights during the week. With the change in ownership, some players left, but Craig encourages them to come back to see what’s been upgraded.
Mondays are the in-house league. Tuesdays are APA ball and Wednesdays are APA nineball, all of which start around 6 p.m.
Starting in January there will be a junior league on Saturday afternoons. For $5 a week, junior players can receive a half hour of instruction and then play for fun and with the possibility of joining up with the Maine Valley League for competitions. The youth league will be a family event where parents stay for the two hours to play or relax.
“It’s not based on a screen. This is hand/eye coordination, geometry and game-manship,” Michelle said.
Also in January, a ladies league will be started on Sunday evening.
Craig came from the collision operations industry, where he worked for 15 years. Michelle works for a non-profit. Neither had billiards experience, but they are excited for this opportunity.
“We believe in keeping it local and supporting other local businesses. We’re residents of Windham and our kids go to school here,” Michelle said. “We are Windham. We’re invested in the community.” 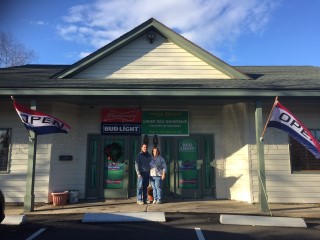 The Newton’s hope to become involved in charity work through tournaments after they are settled.
Take a Break Billiards is also open for events, parties and gatherings. For four hours, a party can rent the space on a Friday or Saturday night with a buffet and drinks, be it a holiday party or a birthday party. The guests can socialize, enjoy the music on the soon to be updated sound system and play pool, while being fed.
Take a Break Billiards offers beer and wine, including Lime-a-rita.
Other exciting things coming are video trivia and Darts Live, which gives players the chance to compete against players from all over the world. They are piloting the system starting soon.
The bathrooms have all been renovated, also. “It’s like flipping a house,” Michelle said about all of the work they’ve done.
For now Take a Break Billiards is open Monday through Saturday 5 p.m. to 11 p.m.
For more visit, www.takeabreakbilliards.com, find them on Facebook or call 310-2886.

Posted by Michelle Libby at 2:00 AM