New Englanders love their sports teams. Year round we root for the Boston teams for basketball, baseball, hockey and football, but finding the merchandise to show true pride isn’t always easy.
Until now. Just before Thanksgiving, Matt Madrid, a professional golfer in his own right, opened Hometown Sports on Roosevelt Trail in Raymond. 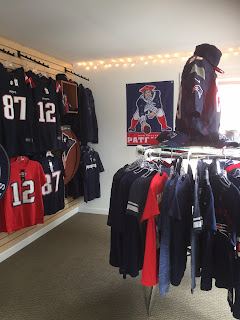 His family has run fan shops since 1986 in Colorado and now Madrid hopes to make shopping for favorite team apparel, accessories and special gifts easier with a quick drive to Raymond. No longer will fans have to drive to the mall to find the same shirt as 300 other people have. At Hometown Sports, fans can get unique, authentic items that very few people have.

Madrid had been vacationing in Maine for years. “The people treat you the way you want to be treated,” said Madrid. He wanted to live here and chose Casco to settle.

The fan shop sells licensed merchandise for the NFL, NHL, MLB, NBA and a few local teams like the Sea Dogs and UMaine Black Bears. He makes it clear that Hometown Sports is not a sporting goods store. They don’t have bats or balls, unless they are signed memorabilia, there is not a lot of that, he said. 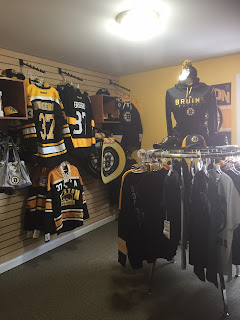 “We want to give back to the community to all locals. What we sell is authentic, officially licensed and affordable,” Madrid said. People can find what they need locally and less expensive than the big box stores. Hometown Sports doesn’t have a high overhead with only Madrid and one other person occasionally manning the store. “We bring in things that are unique and better quality,” he said.
He has an old Pat’s flag with the original logo hanging near the other items. “When you walk in here you don’t see things you see in other stores. We carry tailgate chairs and golf bags” that are branded, he said. 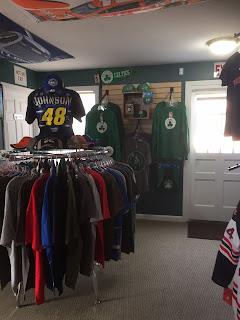 “There’s nothing like this around here. There’s some competition for certain items, but that’s why we’re here,” Madrid said. Giving locals the opportunity to purchase unique fan items at great prices is his goal. He is able to keep the prices low because he owns everything in the store and purchases the merchandise outright from American distributors. 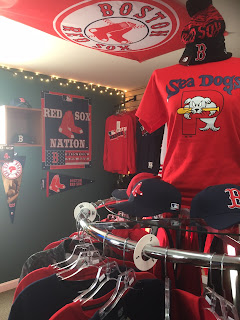 The small building at 1250 Roosevelt Trail was totally remodeled and each room showcases a different team. There is a consistent demand for hockey and football team apparel and accessories. Madrid can get apparel or gifts from any team out there, he said. He’s even bringing in NY Giants stuff for “older guys” who can’t support that new team in Massachusetts. And will also feature Revolution gear for those soccer fans. 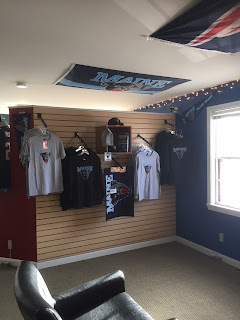 Special orders take from 7 to 10 days with a reliable drop ship program, when customers pre-pay. He can get specialty flags and cozies. Veterans, police, fire and locals always get a 10 percent discount on their order. Active military receive a 20 percent discount.

It’s not just about the gear. Madrid also provides the ambiance that invites customers in to hang out and cheer on their favorite teams. Classic rock flows through the speakers, a 60 inch TV hangs on the wall playing whatever game is on and two arm chairs welcome fans to sit a spell.

If those sports aren’t what a fan is looking for, Madrid carries NASCAR items featuring the big names on the track. He also has a limited selection of Ford and Chevy items, like a Ford camo hat for $20. 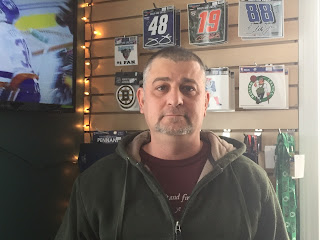 Items can’t be purchased online, but to get an idea of what types of items Hometown Sports sells, their website is a good resource.

Hometown Sports carried sunglasses, license plate covers and bags in the favorite team’s logo. There are items for men and women and a fitting room to try things on. They carry shot glasses, beer glasses, coffee mugs and more.

Hometown Sports has your holiday gifts as well. From baby stuff, like pacifiers, onesies and youth backpacks, not to mention great stocking stuffers. Winter hours are 10 a.m. to 6 p.m. from Thursdays to Sundays. They accept all major credit cards including American Express.

For more about Hometown Sports visit www.hometown-sports.com, call 655-1049 or stop by to watch the game.
Posted by Michelle Libby at 12:33 PM