“Where quality and value still have a meaning.” 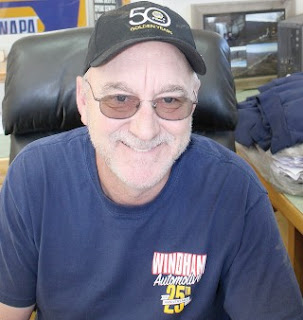 It’s written on the wall at Windham Automotive as a reminder to all who work there and to those who bring their cars to Ron Eby and his team at 385 Roosevelt Trail just east of the rotary. Windham Automotive is not your normal grease monkey shop with the one dirt caked chair and a hot rod magazine in the waiting area.

At Windham Automotive motivational posters with “Dream”, “Ambition” and “Live your Dream” are framed on the walls. Pictures of Eby’s grandkids, recognition for service and plants make the waiting room unique and a place to relax in comfort while the professionals take care of your vehicle.

For Eby taking care of people’s cars is more than just performing the service needed, but making sure that the customer is happy and that the work they do is the kind they can stand behind. They are A+ members of the Better Business Bureau.

Eby and his wife Julie, opened Windham Automotive in 1991, when they moved back to Maine. Celebrating their 25th anniversary is something they are very proud of. Some of their customers have been with them since day one, Eby said.

When asked how he has stayed in business so long, Eby replied, “Probably because we’ve always taken the time to stay up with the technology in the automobile industry.” He has seen a huge change in the industry over the years, but has kept up with ongoing education.  He also takes the time with each customer to explain and put what could be a confusing subject into layman’s terms.

“With the changing industry, we have survived through that by great customer service. There are always people to do it cheaper,” Eby said. “We’re fair, honest and produce a good product.”

Eby and his team pay attention to the details when working with customers. Windham Automotive is based on old fashioned values that seem to be lost in today’s society.

The company has six employees all together who make up the tight knit team. “I have worked with some great people,” Eby said. The automotive technicians are smart, educated and skilled at communication and problem solving, he said. 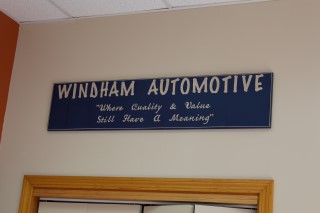 Windham Automotive specializes in customer service while they do general repairs, alignments, maintenance services, timing belts and electronic diagnosis to name a few. Today’s cars are much more complicated than older cars that when they broke, they knew just what to do to fix them. Today, there is seldom any problem that is the same. Although they can diagnose a car and get a code, the code is a brief definition of a problem, Eby said. There could be underlying reasons for that code. “Maintenance is so important. It’s hard to convince someone to pay money for something that’s not broken right now,” he added.

“We are committed to our community and our customers,” he added. He prides himself, but is very humble about his contributions to the community and to organizations close to his heart, like Camp Sunshine in Casco for children suffering from life threatening illnesses. He brought back Summerfest, earned a service award twice from the Sebago Lakes Chamber of Commerce, was given a Six Who Cares Award from Channel 6, and was one of four who earned an award from the NASCAR Foundation.

“These are things we never searched out, but they are ways to open doors to get people to talk about causes,” he said. He is thankful to have had the opportunity to help and meet a lot of great people. 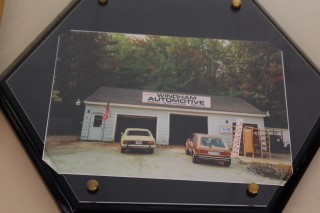 “When you get where you’re going, don’t forget to turn around,” Eby said, quoting Tim McGraw. “I’ve never lost sight of how I got where I am. I’m grateful for the support I’ve had from the community.”
Windham Automotive has a Facebook page, but Eby prefers the old fashioned approach. “Pick up the phone and call us,” he said. The number is 892-1212.
Posted by Michelle Libby at 2:00 AM