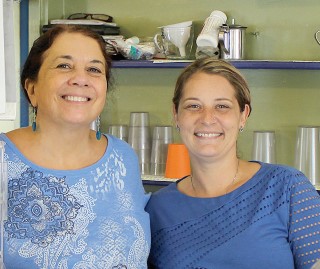 Charlie’s Diner sits just over the Windham/Westbrook border, a tiny haven for foodies looking for a bite of breakfast or lunch. With a menu full of breakfast favorites like Charlie’s Benedicts, omelettes, creative pancakes and other breakfast specials, patrons will never go hungry.

Charlie’s Diner just changed owners a few months ago. Deanna Kennedy took over the management of the diner just after construction began on an expansion project that will add at least 10 additional seats, provide more dry storage and expand the kitchen. An additional bathroom is planned as well.
Angela Libby, the previous owner, wanted to spend more time with her family, so she sold it to Kennedy who had been waitressing at the diner for years.

“I’ve always dreamed about having my own place. Everybody has their own twist to it. I can’t get away from it, it’s in my blood,” Kennedy said. 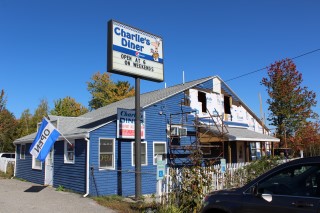 Not too much will change. The look will change, but most of the popular homemade foods will remain, along with the staff which will still be the same fun and friendly people customers have grown to love. There are seven employees in addition to Kennedy.

“We’ve outgrown the space and need to accommodate more customers,” she said. Their customers range in age from six months to 92. Some of the patrons come in every day.

“We’re a little diner place people love. Everybody has different tastes and every restaurant has a different experience and atmosphere,” Kennedy said. The atmosphere at Charlie’s Diner is described as fun.

“My customers are the reason I took over, no other reason than that,” Kennedy said. She has degrees in nursing and accounting, but restauranting pulls her back. 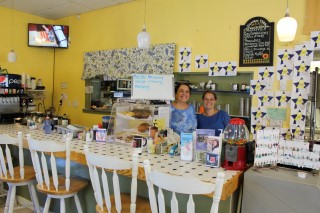 One of the most unique dishes is the breakfast bowl, which contains homefries topped with eggs, choice of meat and three vegetables, and then mixed with a cream and parmesan cheese based sauce. Kennedy described it as a type of soup, but people rave about it. They are also known for their eggs benedict, homemade muffins and cinnamon rolls which are baked daily, among many other things.
“We’re not a fast food restaurant. Every plate is made to your preference. Everything is fresh. Eggs don’t sit in a warming tray, ever,” she said. “That makes a big difference in the taste of food.”

“None of the food structure will change,” Kennedy said. Some of the dinner items are going away, but will be added in as specials for lunch. They will continue to have burgers, fresh haddock and steak and cheese sandwiches, which they are known for.

“Oh, they make the best eggs. I can’t wait to come here,” said Harriet Woodman of Westbrook who comes daily with her husband Woody.

“I want people to leave here full and happy.” 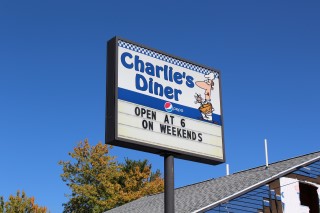 Kennedy has plans for when the expansion and remodel is completed. She hopes to have a drive in and out entrance so people who want to pick up a breakfast sandwich and coffee to go can have easy access. “I’m looking to increase my morning customer base,” Kennedy said. An under $5 deal for a breakfast sandwich and a coffee on the way into Portland can’t be beat.

Charlie’s Diner will be closed from Sunday, November 13 after 1 p.m. until Saturday, November 19 at 6 a.m. to complete the renovations. At the time of reopening, the entrance to the diner will be on the side by the parking lot, instead of near Route 302.  The restaurant is handicapped accessible.

The hours are currently 7 a.m. to 2 p.m. Monday through Friday and 6 a.m. to 1 p.m. on Saturday and Sundays. On Sundays the diner will only serve breakfast. Starting November 19, they will be open at 6 a.m. daily.

Deanna Kennedy stands with weekday waitress Rita Pomarico, who has been working at Charlie’s Diner for two and a half years.  She makes jewelry, which she sells at the counter in addition to giving great service.
Posted by Michelle Libby at 1:10 PM