Since opening Windham Powersports at its present location on Roosevelt Trail two years ago, Chris McDonald has only seen his business grow. 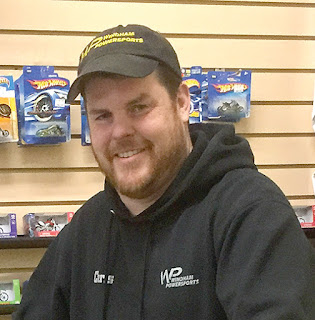 Windham Powersports is not only known for their outstanding small engine repairs but has also become known for their plentiful line-up of youth sized 4-wheelers which can be seen on any given day in front of their shop on Route 302 at 1037B Roosevelt Trial. The shop buys and sells everything from 4-wheelers, dirt bikes and go-karts to lawnmowers and snow blowers. They expanded to selling brand new youth-sized machines after McDonald saw a need to fill this niche in the market.

“The business is worlds apart from what I expected it to be,” McDonald said, not at all upset by that.
This past week, Windham Powersports opened up a new showroom in one of its garage bays. The new retail space is what McDonald needed to service his customers who wanted brand new machines and new parts to fix and upgrade the machines they already have. They are also an Interstate Battery dealer. The showroom even has a display of Hot Wheels that are 4-wheelers and snowmobiles. 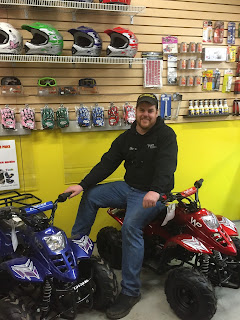 He is the exclusive carrier of Coolster kid machines, which are high in quality but lower in price than other manufacturers. Because they are assembled onsite, they are able to give customers a better price than almost anywhere else.

New stock is available year round. Used items are by season and obtain-ability. “Two or three years down the road, you can sell it back because we take trade-ins,” he said. “Then get the next size up.”

“It’s a little store. It’s bright and vibrant,” said McDonald. In the store he carries parts for almost everything he sells as well as drive belts for most small engines like snowmobiles, ATVs, 4-wheelers and snow blowers, youth or full sized. He has rebuild and handlebar kits, youth helmets, gloves and goggles of all colors. “I want to expand the market and what’s available to offer to my customers,” McDonald said.

Although service is a little less than half of their business, the mechanics are kept busy repairing and fixing machines for customers.

“I can be the guy who works on everything,” said McDonald. “We have better rates than anyone and my two mechanics know what they are doing.” The number of mechanics increases in the summer to three or four, he said.  McDonald sells kid-wheelers and go-carts and also sells bigger items like scooters and adult sized machines.

McDonald has developed relationships with other business people in similar industries. If he can’t meet a customer’s needs, he refers them to other places. 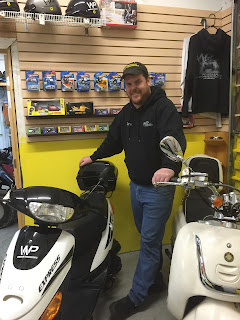 Windham Powersports fixes items for people who have been driving the same lawnmower for 20 years or the 14-or 15-year-old kid who drives his bike out of the woods and says, “Dude it’s making noise, can you fix me up?” They do not fix anything that goes in the water or street bikes. They do fix scooters.

“Building a relationship with the community is so important for me,” said McDonald. “Sitting around the dinner table, I want to be on the tip of the tongue when someone needs something fixed.”

Windham Powersports is running a local special free pick-up and delivery to anywhere in Windham. “We’re trying to help solve that problem for people,” he said.