Sweet Georgie Ann's Books and What Not - By Michelle Libby

A new children’s book from Barbie DelCamp “The Gambo Way” chronicles the life of a family of geese near Gambo Falls Dam in Windham. She spent thousands of hours taking pictures and waiting, even getting Lyme Disease while watching the geese.

“I write non-fiction. I would like children to be excited about what’s going on in nature,” DelCamp said. DelCamp is her own publisher. “I do all the work.” She uses Lightening Source for her paperback and hardcover copies.

When DelCamp lost her mother to Alzheimer’s, after caring for her for three years, she decided to write a book about her life with her mother and the disease. The book for adults is called “When It’s All Said and Done”.


“I had read books, but none of them were my book, my story,” DelCamp said.

She realized that she wanted and needed a hobby after that. Someone told her about seeing eagles down near Gambo Falls Dam, so she went looking for them. She never found the eagles, but she did find the geese.

She began taking photos of them with a small camera as a distraction. She created videos and got better. Three times she upgraded her camera and she found she loved being in nature. DelCamp’s mother, Georgie Ann Forney, was a kindergarten teacher in Bridgton and “she adored books.” She encouraged DelCamp to write.

“I fell in love with photography,” she said. “If I could draw, I’d have been an illustrator.” Her first children’s book was “Four Parkway” about Osprey.

Her latest book, “The Gambo Way”, is about geese that came to Gambo Dam to spend the summer and have babies. The graphics in the book are actual photos DelCamp took during the thousands of hours she spent geese watching and chasing. She used a photo enhancing program to make the pictures look like watercolors. She spent her time 75 feet away from their nest with a 500 mm lens, and was there for all of the milestones.

“It was pouring rain when the eggs hatched,” she said. “I was so invested in the essence, in the people and the wildlife.” After the goslings were born the mother and father brought them over to where DelCamp was sitting to show them off. She had become part of their world.

People walking their dogs also became part of DelCamp’s world, often stopping to mention something exciting they had seen, or the kids would collect frogs for her to photograph.

“I really did a lot of hiding. People would find me and laugh,” she said. She saw numerous species of wildlife including a fisher cat that chased her. She remembers screaming hoping to scare it off. “I was petrified,” she said.

After the geese left the nest, she followed them to a field in Gray to watch the migration. “I fell in love with them,” she said.

The lead geese in the book are Izzy and Lucy, who were named by other people, she said. The last time she saw Izzy and Lucy were mid-October.

“The best part was taking my adult experiences and bring it down to a 4- or 5-year-old level and reliving my experiences,” she said. At the end of each book there is a “Did you know?” section with extra information for the kids and adults reading the book.

Her new projects include a children’s book about the geese at Evergreen Cemetery in Portland, which was exciting because she was able to be much closer to the geese.

“I wanted to do something special because I think Evergreen Cemetery is a special place,” she said. The book is scheduled to be released the week of Thanksgiving.

She is also working on a book call “The Teeny Tiny Beach Birds” about piping plovers at Ferry Beach. The release date for this book will be December 11.

“I’d like to know more [about the geese]. I understand a lot about geese, more than most people. They’re romantic, monogamous and love family and being together,” DelCamp said.

With every book she releases, she’s excited. “Every time it’s like the first one,” she said. DelCamp lives in Portland with her husband David. 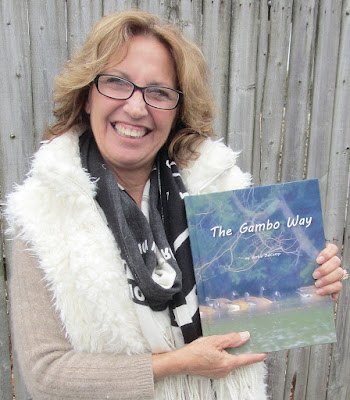 DelCamp’s books come in hardcover and paperback and can be purchased on her website, www.sweetgeorgieannsbooksandwhatnot.com, on Amazon or at Barnes and Noble.