Owner Steve Chambers has a passion for art. It’s this artistic creativity that led him to his current career as a tattoo shop owner and artist at Halcyon Tattoo at 120 Roosevelt Trail in Windham. The new storefront opened in August. Before that he had a shop in Westbrook.


He said that being in Windham is a good thing. “It’s where I live. I think the market is saturated in Portland. Being in Westbrook was for convenience, since he and his wife own the building that houses Voila Salon and, formally, Halcyon Tattoo. 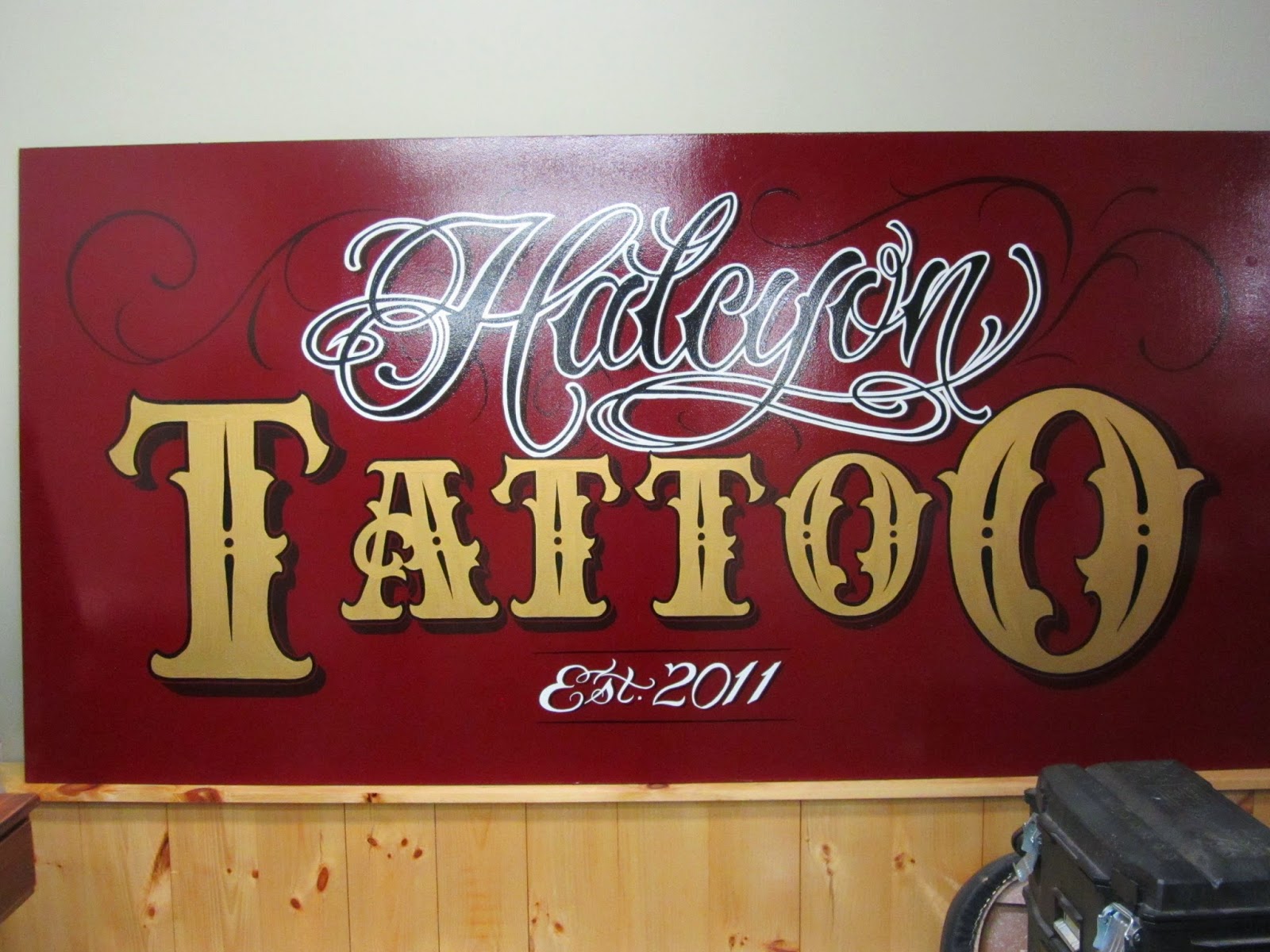 Halcyon Tattoo specialized in custom tattoo art. No two pieces are the same, Chambers said. The people who come here are willing to wait for the art work to be just right. Customers come into the shop, one of the largest, if not the largest tattoo parlor in Maine, with an idea. From the idea and brainstorming with Chambers, he then creates the artwork and consults with the client for approval. Sometimes he crumples up three or four versions before finding one that he approves of.

“Everything is custom. We never do the same piece on another customer. That why customers come here and are willing to wait,” Chambers said. Very few people come here on a whim, he added. He can do generic, basic tattoos and smaller pieces that don’t require a lot of effort for pulling everything together.
His artwork is more on the realism side, he said. For that it has to be all planned out. Chambers has always been artistic and took art classes at the vocational school in Portland. “I’ve always been in tattoo shops since I was 15,” he said. He was 15 when he got his first tattoo, an eagle.

His customers come from all over the area and even Canada. They find him through Facebook and searches for artists online. “They’re all unique and they’re all crazy, I think,” he said with a chuckle. 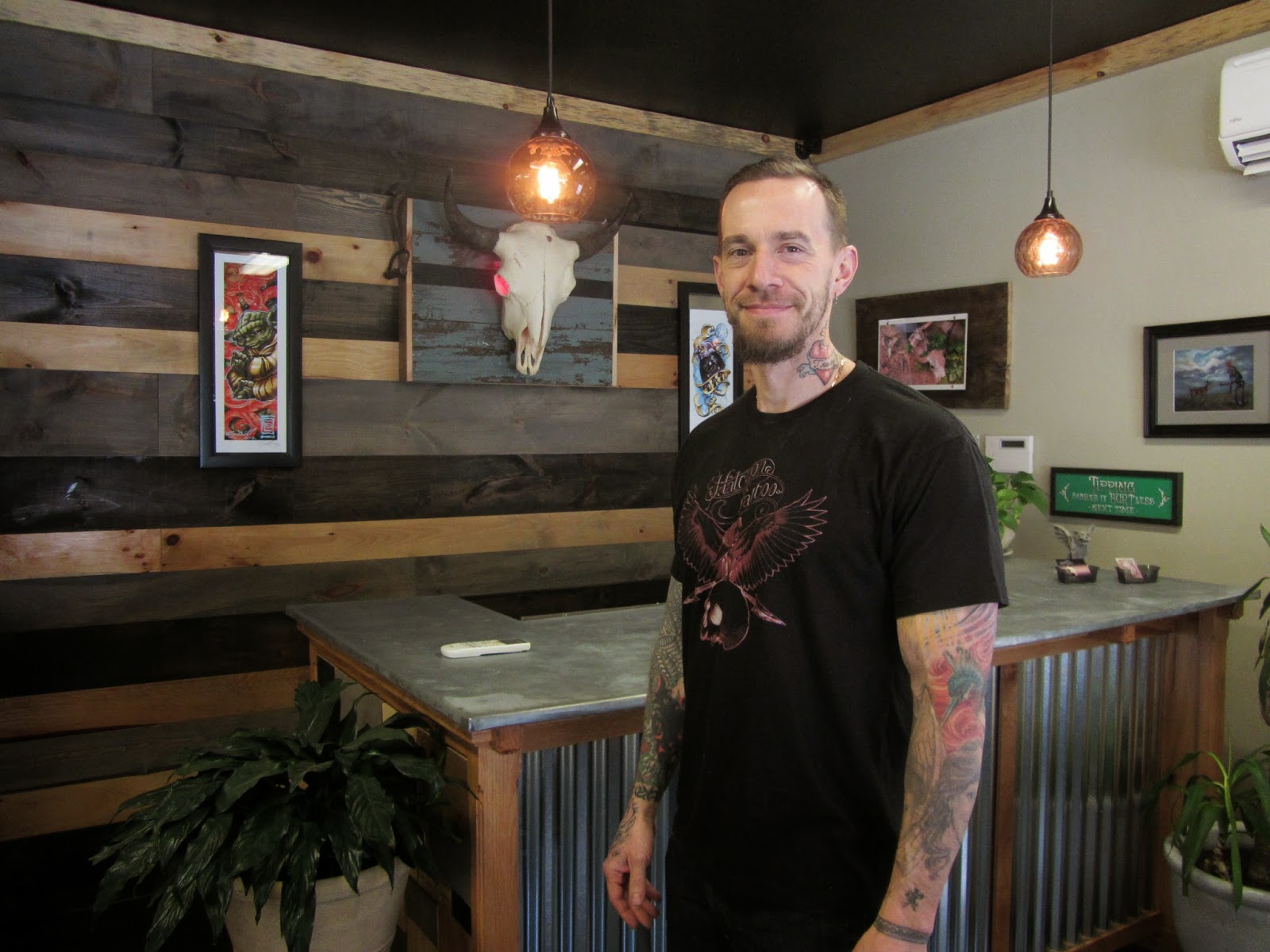 There are certain areas on the body that are easier to tattoo and that hurt less. Arms and legs are easy, but on the ribs and stomach the skin is stretchier and it changes how the tattoo looks. He also said that any place that the sun had damaged is easier to tattoo. “It’s painless. It’s more annoying,” he said about the needles. He relates it to an elastic snapping you or a cat scratching you. “Everybody’s got a different pain tolerance,” he said.

Tattoos can take anywhere from three to 13 hours depending on the level of detail.

Aftercare is very important to a tattoo. Keeping it protected from the sun and from germs is crucial after getting inked. It will take three to four weeks for the tattoo to completely heal. Halcyon Tattoo has another artist working there, Doug Landry. Chambers said he is picky on who he brings in to work at his shop.

“One bad tattoo comes out of here and people will be talking bad about you forever, because tattoos are forever,” Chambers said.

Many tattoo artists like to outline, shade and then color. Chambers prefers to finish a section at a time. He can do it the traditional way, but prefers to have a client leave with a finished section to show off.
Prices start at $60 and go up from there. He said that “no tattoo is ever finished and it’s addicting.” 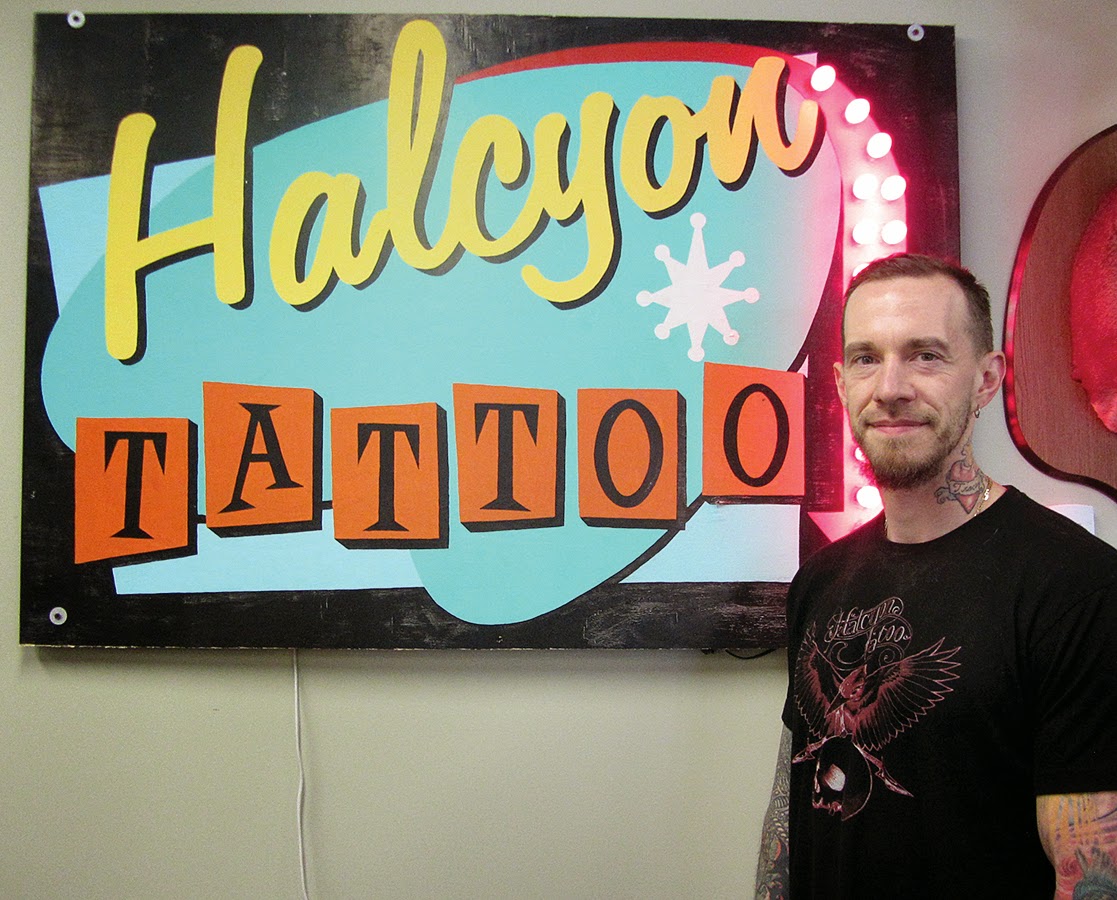 Chambers has his own tattoos. He can’t do it on himself so he searches out mentors he can learn from before he makes an appointment. He looks for styles that match his own. “I want to strive to be the best,” he said.

Some people search out tattoo artists to cover up scars or so they don’t feel like the only person at the party. “I got tattoos to be different,” he said. It’s not like that now. Chambers also said that he is afraid of needles in a doctor’s office and that getting a tattoo is nothing like that.

Steve has been married for 15 years and has two children. 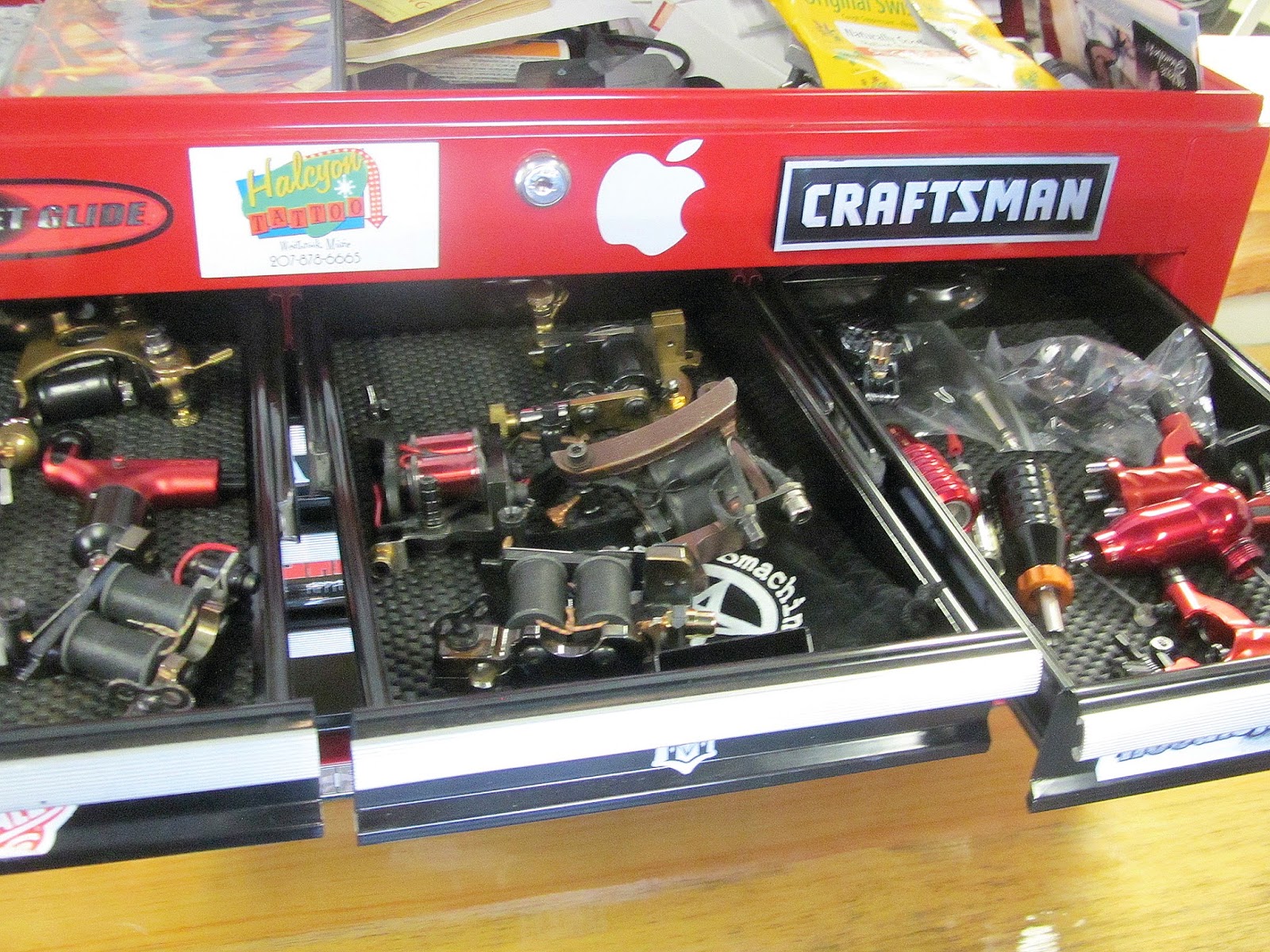 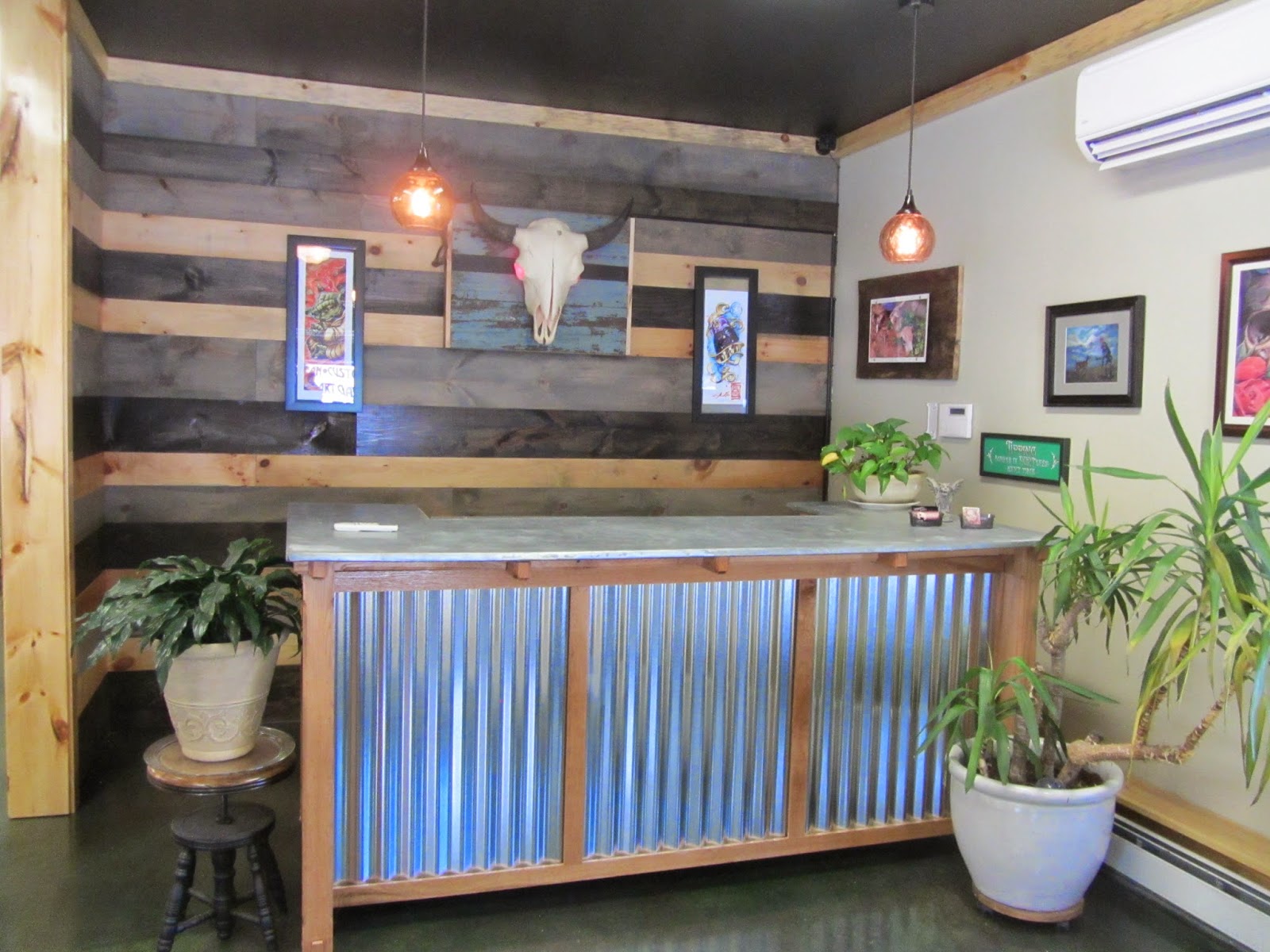 “I love this more than anything else I’ve done,” he said. “I’m a perfectionist…a little OCD.”
Posted by Michelle Libby at 4:20 PM