When Bill and Katelyn Allen opened Sebago Trails Paddling Company in May of 2013, they didn’t expect it to be the rainiest spring in recent memory. Despite the wet beginning to their business, they rented canoes, kayaks and paddleboards to locals and tourists until the end of October.

This year has already been a better paddling season, said Bill, who has been paddling since he first learned to row at his grandfather’s camp. When he was in high school, he purchased his first kayak and hasn’t looked back. 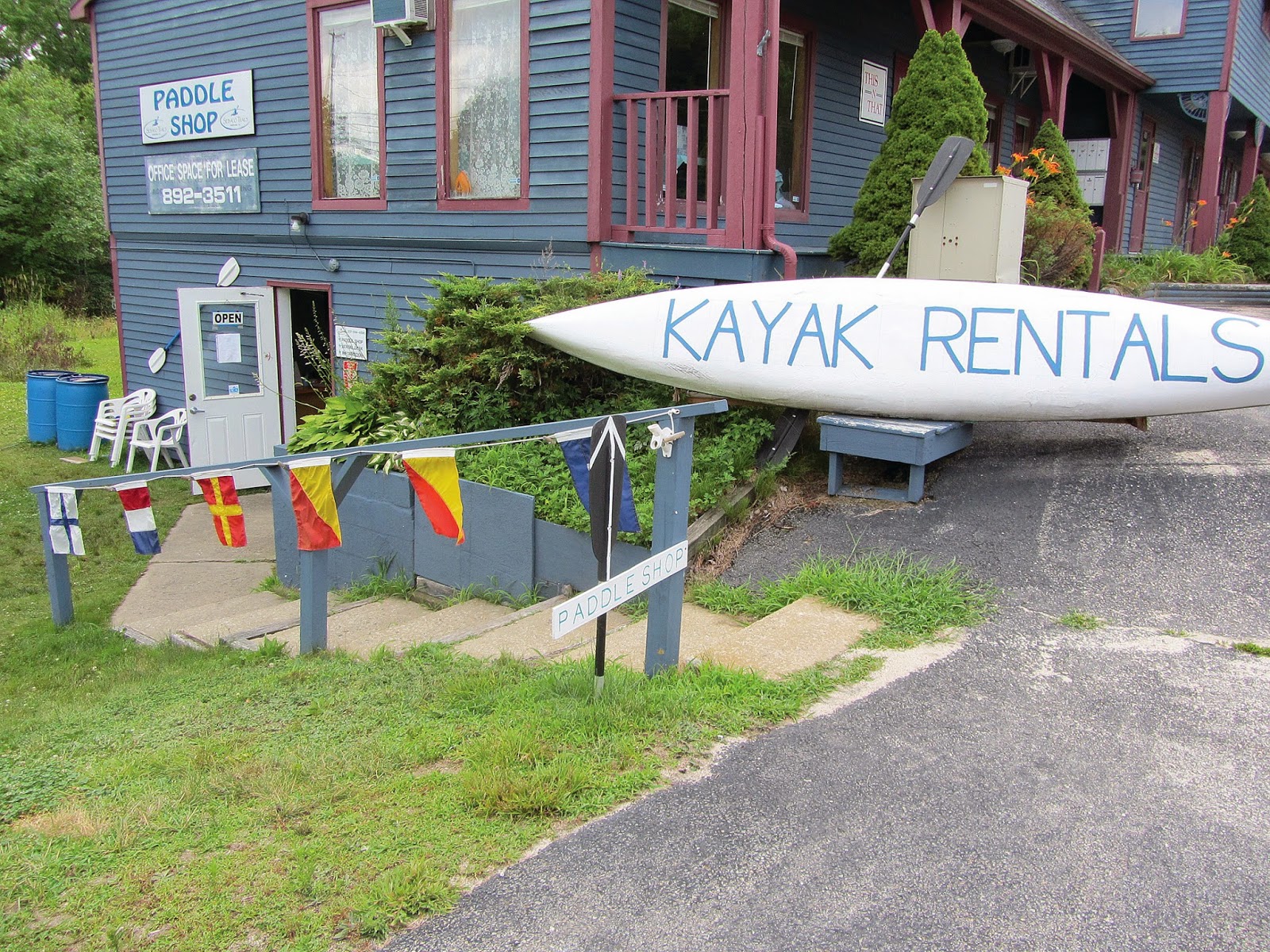 Sebago Trails has more than 40 boats to rent by the hour, day, week or more. In addition to renting kayaks, standup paddleboards and canoes, it also buys and sell used boats and do some consignment sales. Bill and Katelyn do service on kayaks and canoes and do plastic welding on boats that have holes in them. They have even done trade-ins.

“I do a lot of information giving,” said Bill after a customer stopped by to find a good place to canoe with his daughter.

“I want to be the go to person. Do you have a question about paddling in the region? I have the answer,” Bill said.

There are 30 to 40 launch sites in a 12-mile radius of North Windham, and Sebago Trails delivers to any of those sites for a small fee. Boats, life jackets and paddles can also be picked up at the shop. The store has a small retail stock of sunscreens, bug sprays and water tight bags to store valuables in as well as life jackets and paddles. 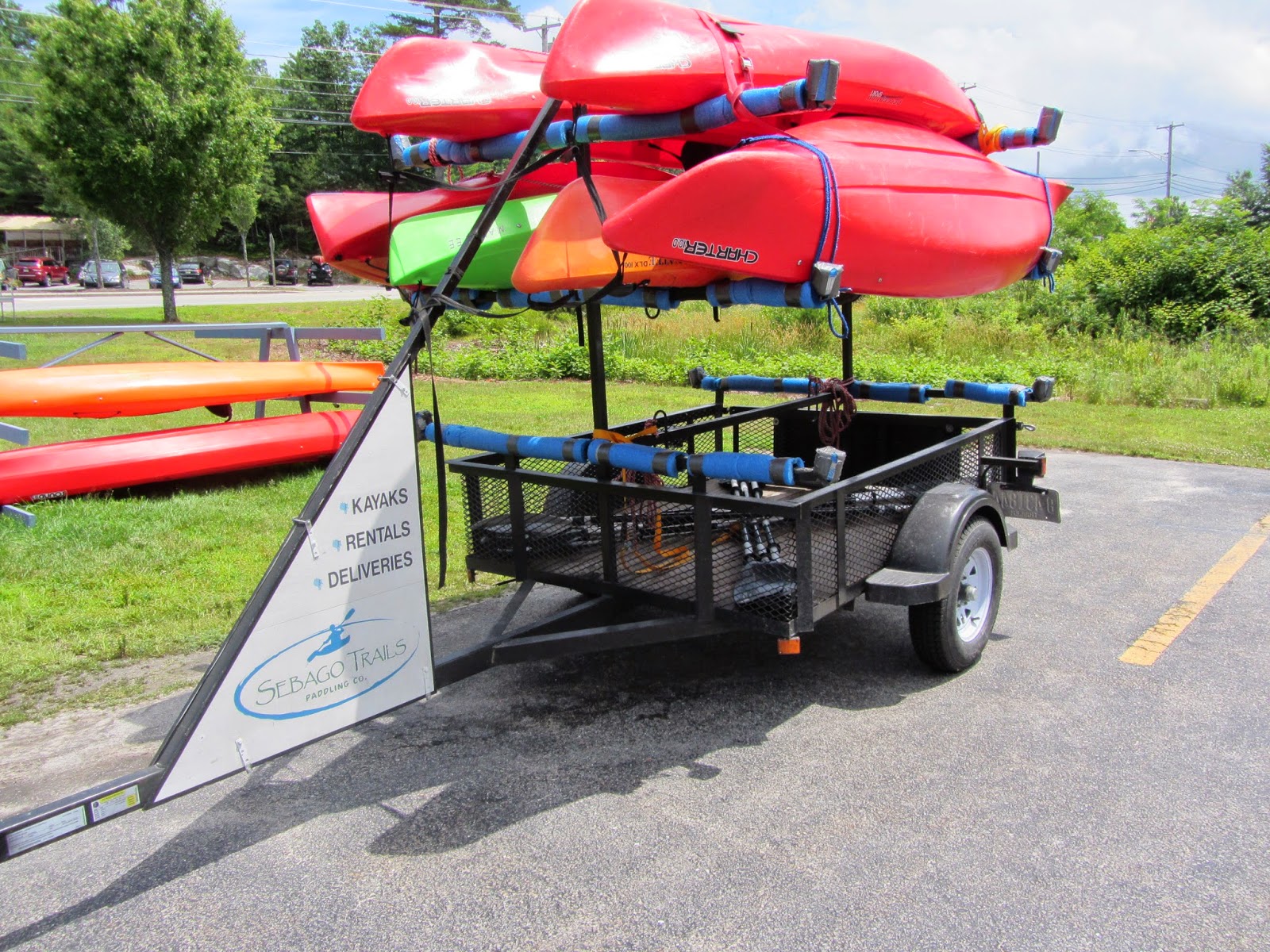 The store front is located at 4 White’s Bridge Road, right off Route 302 in North Windham.

Sebago Trails Paddling does more than just kayak rentals, they also do classes on paddling through Windham/Raymond Adult Education and Gorham Adult Education. They are also on www.meetup.com/Windham-Raymond-Paddling-Club/. Through the meetup site, Bill and Katelyn set up different paddles. Bill is quick to point out that there is no membership, no dues. A person brings his or her own craft to paddle or rents one from Bill and then they go with the group. “It’s like a flashmob,” said Bill.
Last Saturday, the meetup did a full moon paddle at Raymond Beach. They watched the sun set and the super moon rise from the seats of their kayaks. There is another meetup scheduled for August 10th. “A lot of people are virtual strangers and at the end they’re friends,” Bill said.

Sebago Trails stays open until October for fall foliage paddles. “This is really what people are missing out on,” he said. October first is a great time to paddle to see the foliage. 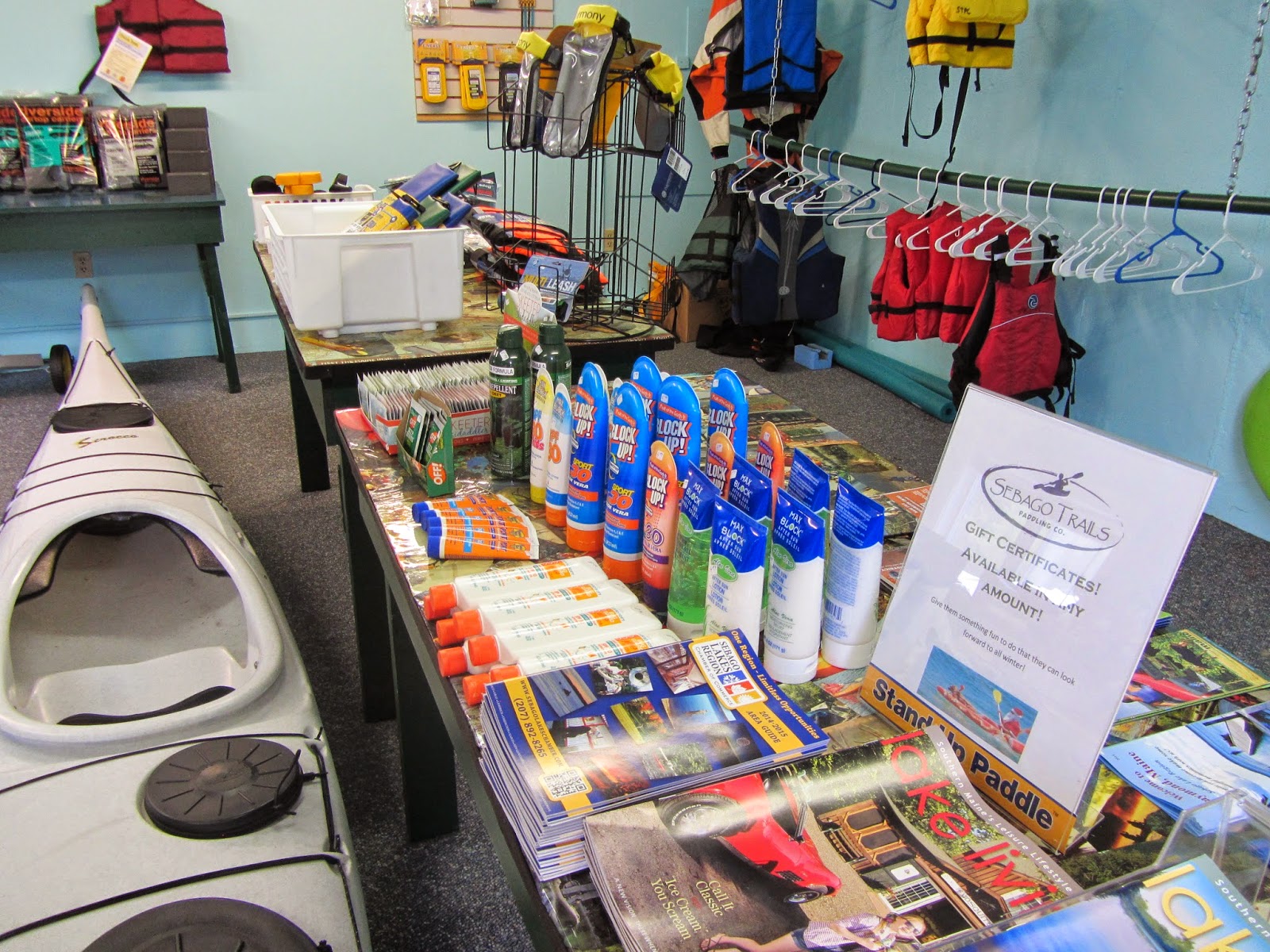 In the area, tourists are often amazed at how much wildlife they see on their paddles in Windham, for example. One couple from New York rented kayaks and went over by Gambo Dam on Bill’s recommendation (it’s his favorite place). During their trip, they saw deer, a bald eagle, geese and more.
In addition to meetup, Bill also organized paddles for groups.

For a quick paddle, visit Lippman Park and rent kayaks by the hour from Sebago Trails Paddling Company. The cost is $10 per hour and renters go to the store first, then go get the kayaks. There are three kayaks and a canoe stored near Chaffin Pond for rentals. 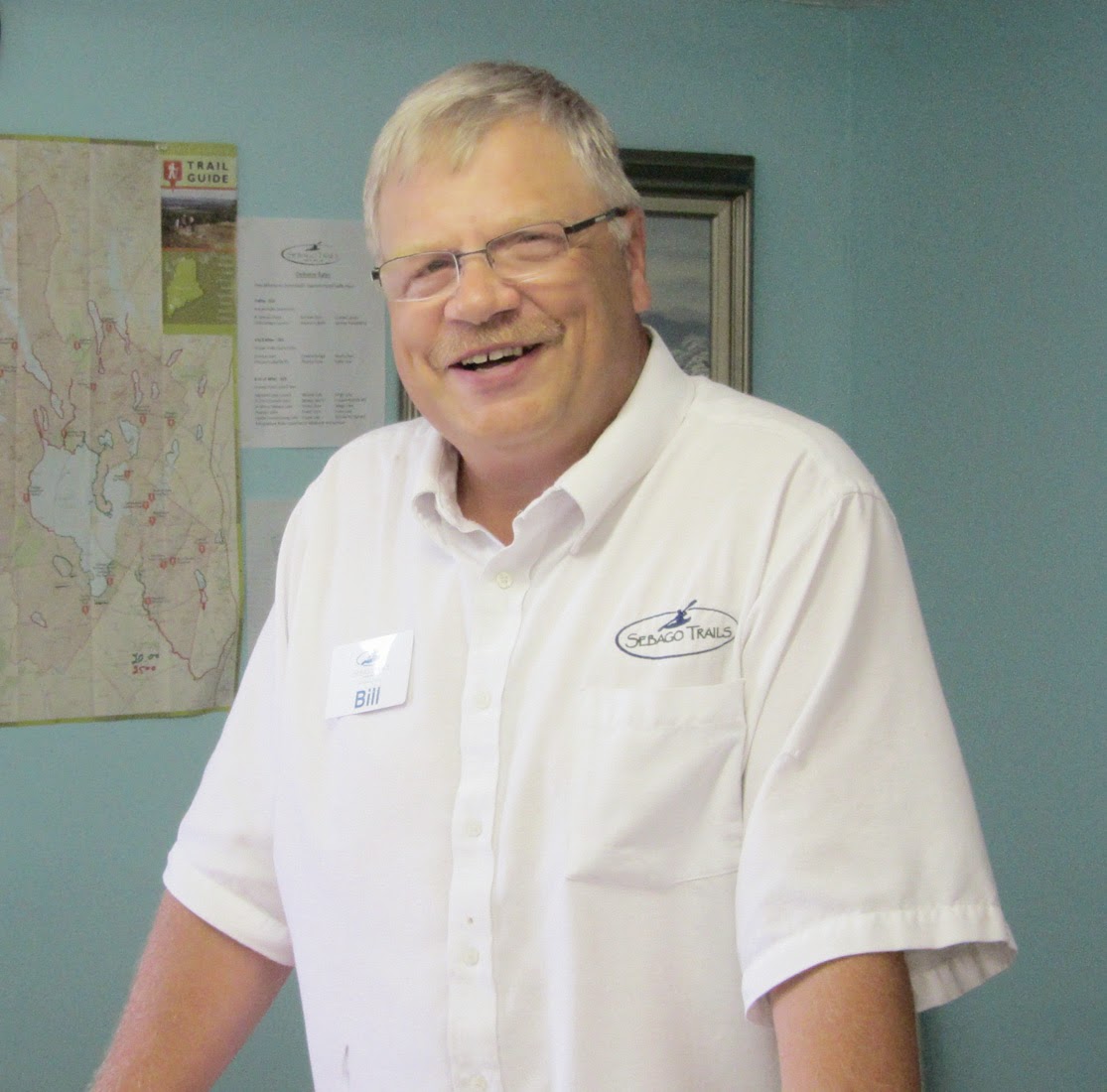 In the future, Bill hopes to increase the retail store inventory. “I’d like to be the area’s leading paddle sports outfitter,” he said. They will also be expanding the sales of new Emotion and Riot kayaks.
Renting is a great way to discover if you like the sport before forking over the money and then discovering that it’s not to your liking. “The first goal is to go out and have fun,” Bill said.

Reservations are recommended. Visit them online at www.sebagotrails.com, in Facebook or call 894-4696. 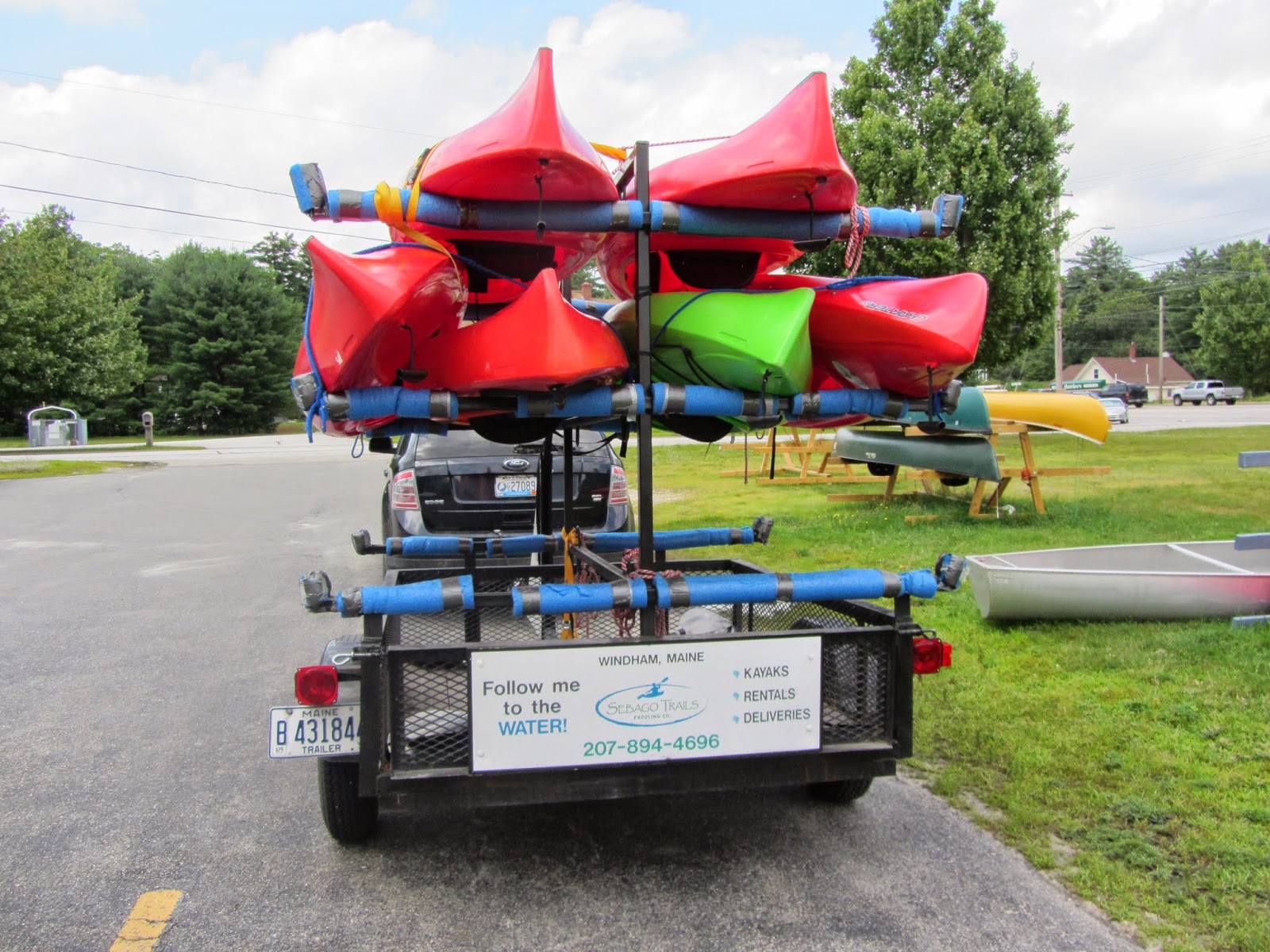 Posted by Michelle Libby at 3:38 PM