Windham resident Cathy Streifel never intended to produce clothing, but when she couldn’t find what she was looking for, she went all out to create snowskants. Skants are a combination of a skirt and pants made with fleece, a soft shell fabric that is water resistant with a snow gator on each leg just for women. There is no fly, no pockets and no buttons. There is no hardware that could break or catch while participating in outdoor activities. The snowskants have pull on ease with the comfort waist of a yoga pant. The material is inherently waterproof and windproof, which is great on the mountain, and can be washed at home.

“This is for fun. It’s a product for having fun,” said Streifel who has a bachelor’s degree in sociology and an associate’s degree in fashion merchandising. She also worked for 10 years in the ski industry. She knows the ski culture.

Streifel is an outdoor enthusiast. She skis, hikes and whenever it’s cold she wears her skants. She was never in the apparel industry, so she found it difficult in the new adventure, to get exactly what she wanted. She found a woman in Massachusetts to make a pattern and then she searched to find manufacturers in the U.S. “I didn’t let it stop me,” said Streifel, of the roadblocks she found.
She was paired with a company in Hildebrand, NC, to make the skants. 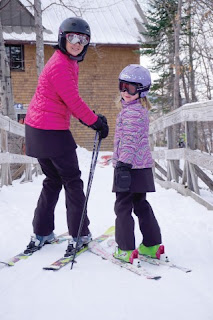 She created 200 pairs after wearing a prototype pair for skiing last year. After making some changes, she is happy with the products she has produced and proud they are made in the United States. When she started looking for something to wear on the slopes, she found running skirts, mountain biking skirts and skirts on bathing suits, but nothing she could wear on the mountain.
“I did a thorough Internet search to the end of the Internet,” Streifel said. “But I came up with nothing for Alpine skiing.”

She met with a patent attorney, who came up with the snowskants name. “It’s a product they’ve never seen,” Streifel said about the people on the slopes. She created big tags, manufactured by SML in Lewiston, Maine, that people could read when she was in line for the chairlift.
Snowskants aren’t only for alpine skiing. They can be worn ice skating, skiing, snow shoveling or to football games when the temperatures drop. They can even be worn while walking the dog on those cold mornings, Streifel suggested. No long underwear needed.

The snowskants keep people warm on the cold benches at football games or on the chairlift.
For one woman from New Hampshire, it was a modesty thing. Having a skirt helped cover some of the areas she didn’t want to expose.

She started Pyxie, LLC, in January of 2015, as a company to produce snowskants. At some point Streifel hopes to expand her girls’ and women’s wear with different colors and patterns and hats and sweaters.

Streifel grew up in Casco, moved to Colorado and has returned to Maine to raise her two children. Streifel’s husband Chris has been supportive, helping with social media marketing.
A former Olympian in Olympic Valley, California wears snowskants and a skier in Colorado also wears them. Even Mallory Brooke from Channel 8 wears snowskants to report on the weather. Although it isn’t a huge trend yet - Streifel hopes that once women try them, they won’t want to wear anything else.

The women’s skants are $179.99 and the girl’s skants are $99. Through this article, order using the coupon code Eagle, and get 20 percent off the order. Snowskants make great gifts for any woman who spends time in the outdoors. Locals can avoid the shipping fee by emailing: cathy@pyxie.co.
Snowskants are also available at Sugarloaf, in Big Sky, Montana and two Michigan stores.
You can find snowskants on Facebook at Pyxie, LLC, and Instagram and on Twitter follow: @snowskants.
Posted by The Windham Eagle at 2:00 AM