Modern Woodmen is a financial organization that cares about its members, finances, and more. Modern Woodmen has two parts, one is the financial side and the other is the fraternal side, where members are encouraged to volunteer and get involved in fun monthly activities sponsored by Modern Woodmen. The branch in Windham, run by Managing Partner Tim Graham, is involved in many community activities from matching funds for local projects, to plant a tree programs and educational programs. Also there is Hometown Heroes, which honors positive role models. 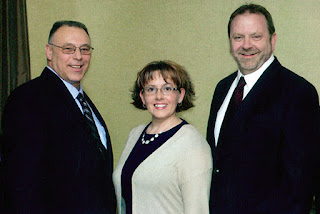 “It really comes down to the relationship you have with someone,” said Graham. “Members have to have a warm and fuzzy feeling when you’re working with them.” At Modern Woodmen, they foster that personal relationship and know that communication is priority one.

“It’s about you, not about the advisor,” said Graham. They get to know their clients and find out about risk tolerance and financial goals. The team in Windham is office manager Stephanie Dow, financial representatives Laurie Paradis-Graham, Mike Toth and Graham. When hiring team members, he looks for people who are honest, have high integrity and morals. These are the people clients are trusting to take care of their financial wellness.

The mission of Modern Woodmen is “To improve the quality of life for our members.” Modern Woodmen’s goals are to, 1. Take care of its members. 2. Keep the lights on. 3. Put the balance of the money back into the community. “It’s a good business model,” he said. “Our philosophy is to treat our members’ money as if it was our own.”

Modern Woodmen got its name 132 years ago when the organization was created to care for the widows and orphans of the logging industry. Today that tradition of caring is what drives the employees of the company.

Today, members are anyone from a family with young children to older couples who want to discuss estate planning or when to take Social Security. Modern Woodmen offers life insurance, online banking, retirement plans, college saving programs and most other financial products.  “Modern Woodmen is rated A plus by A.M. Best for 31 consecutive years,” said Graham. For every $1 of liability Modern Woodmen has, they have $1.11 on hand, should a payout be needed.

The Windham branch services a 30 mile radius around Windham.  Recently they have been helping current clients and new clients develop a plan and become educated on the opportunities available when their companies give them a buy-out option or they have to discuss retirement.  They like helping people should they be laid off or have to roll their 401k.

“We educate them so they can make a good decision,” said Graham.

At one point the industry thought day trading on personal computers would make the need for financial advisors obsolete, but now people have realized that it’s the personal interaction that can help a person meet their financial goals. Modern Woodmen offers yearly reviews and for some members they meet more often as requested. There are many member benefits like college scholarships, accelerated benefits and a prescription savings card.

“The best part is when someone retires and they start getting paid,” said Graham. They are then reaping the benefits they have worked so hard for, he added.

Modern Woodmen is working on developing another chapter on its fraternal side, which will enable them to give back to the community more. For more information or to speak with a financial advisor, contact Modern Woodmen at 207-892-0302 or online at www.modern-woodmen.org.
Posted by Michelle Libby at 6:45 PM No comments:


At Audio ‘D’ & Finetone Hearing Aid Center & Labs, they can create a hearing aid for almost anyone in an onsite lab at 885 Roosevelt Trail in North Windham. They offer services for anything hearing and hearing aid related, said Ted Gauthier, hearing aid specialist and son of the owner Ed Gauthier. “Testing, fitting, testing for truck drivers for DOT, we do all hearing aid related services,” he said. 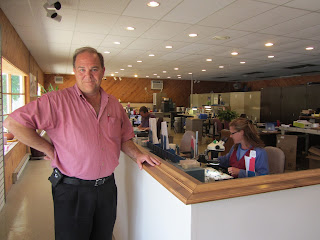 Hearing aids have changed a lot in the 30 plus years the Gauthier family has been working in the industry. Ed created a chip for a hearing aid in the 1980s, but when asked if it was still being used today, the employees laughed because everything is much smaller than it was then. The technology today is more impressive, where hearing aids can work with a cell phone through Bluetooth or can act as speakers with a TV, putting the sound directly into the hearing aids.

“Hearing aids today are really good functionally and they’re starting to get fun,” Gauthier said.
When Gauthier was a boy, his childhood friend’s younger sister was an “absolute nightmare,” everyone yelled at her, he said. “Her problem was hearing loss. That drove home to him, me and the family the importance to hearing. No one shouts ‘I love you’,” he said.

In the 1990s Audio ‘D’ was acquired from a company that both Gauthiers worked at. They named it Audio ‘D’, with the D standing for Dynamics. In 1999, they acquired Finetone Hearing in Maine. “The two product lines complemented one another really well,” said Gauthier. 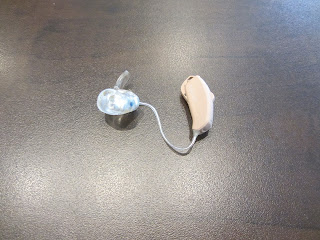 In 2001 and 2002, the company had a major shakeup, redefined the business model and stopped working with clinical trials and product modeling, moving in to manufacturing hearing aids. “We focus on niche products as opposed to trying to compete head to head with the big boys,” Gauthier said. Audio ‘D’ has a product line of approximately 45 different models. The direct to customer sales provides them with cost savings, he added. 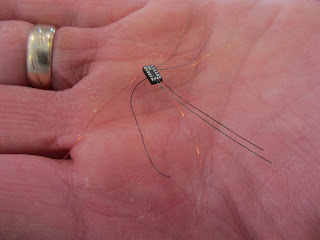 Being located in Windham is convenient when “something silly happens,” like rolling over in a kayak, getting into the shower with the hearing aid in, or going on water skis without taking them out. These are all things that have happened, according to Gauthier. Patients bring their hearing aids in and they can be fixed within a day, usually.

Customers come from as far away as Connecticut and Vermont for service. Occasionally, Gauthier will go to someone’s home to fix a hearing aid, however, they have more tools and controls in the office, Ted said.

Hearing problems are not just for the elderly. “Seventeen percent of people in their 30s have enough hearing loss to warrant hearing aids,” said Ted. “Hearing loss is a prevalent, chronic condition in the US.”

Most people think of hearing loss as an inconvenience, but that hearing loss, if not checked, can cause problems that can affect a job, relationships, can increase the likelihood of getting dementia and falling. “The quality of life differences are huge,” Ted said. 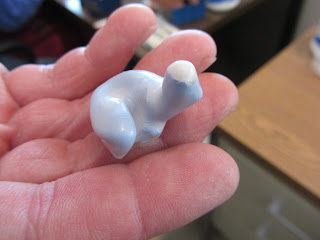 The office is going through a remodel and will have more displays up at the end of the month. They are open for business and welcome new patients. They offer free hearing tests, and even if it shows no need for hearing aids, having a baseline is a good thing.

Audio ‘D’ is not a high pressure atmosphere. “We’re looking to find the right solution to help someone. It’s not about the hearing aid, it’s about the people.

Posted by Michelle Libby at 6:14 PM No comments:


Quality of work and communication are what makes O’Shea Builders stand out against its competition. Warren O’Shea, owner, keeps his eye on making sure his clients are satisfied and that all people who work with contractors are treated fairly.

O’Shea Builders is known for kitchen and bath renovations. They don’t do a lot of new construction, O’Shea said, preferring to help people realize the potential in their own home.

“Where we really excel is renovations,” O’Shea said. 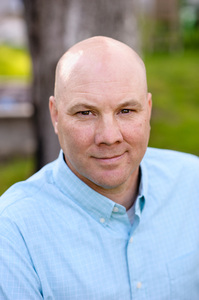 From Freeport to Scarborough and around Sebago Lake, O’Shea builders is interested in renovating homes and vacation properties so owners can take advantage of increased space and value.

O’Shea had a project where a homeowner turned a three to five bed home into a rental with 14 beds. The home, on the ocean could have rented for $2,000 to $3,000 per week before renovations. After, the homeowner could ask for $7,000 a week with the addition of three more bathrooms a new kitchen and deck. It became an “income generating property,” O’Shea said. “They added value to the property to increase rental revenues.”

O’Shea Builders stands out from its competitors with its “transparency and forwardness” of how it conducts business. With really good, accurate paperwork with receipts and documentation in a consistent format, clients know exactly where their money went.

O’Shea has had opportunities to work on projects like HGTVs Vacation House for Free and Restaurant Impossible, remodeling homes and businesses to satisfy the customer and the television executives. He has also worked with Channel 13 On Your Side to help viewers when they were left high and dry by a contractor.

“Our quality of work speaks for itself and stands out as does our track record for quality,” O’Shea said. On its www.Houzz.com website, O’Shea Builders has over 21 five-star reviews and is the highest rated general contractor in the area, he said. There are also many pictures of completed jobs.

“Every job is important,” O’Shea said. From the $400 gutter job for a property in Portland, to a $350,000 renovation brought in by a referral, he never knows where the next job might come from. That $400 job might turn into a larger job when the family needs to remodel its kitchen.

O’Shea has been doing construction since 1986. In 2002, he founded O’Shea Builders, which now employs six people. O’Shea has multiple accreditations and awards, which he attributes to his professionalism and quality of work. He also uses lead safe practices. A few years ago he was given the Citizen’s Award from the Portland Police Department.

O’Shea was an EMT for a short time, before leaving the profession to do building on Cape Cod and then antique reproduction furniture and getting fine woodworking experience in Virginia.

The most important key in a contractor/client relationship is communication. Whether it’s communicating with production, designers, purchasers or a person who want to remodel, but isn’t sure where to start, O’Shea wants to make sure he has the right company for the job.

“My favorite project is the client who has specific requirements on how the project will perform and meet those requirements.”

While at the lake house over the Fourth of July, look around to see what upgrades could be made to increase rental value or to make more room for family during the peak seasons. A great time to do renovations is over the winter, when the house is closed. Do check out a contractor thoroughly before hiring someone. There are good and bad contractors out there.

“I want clients to feel confident they hired the right person so they won’t have to worry,” O’Shea said.
To watch the Vacation House for Free episode featuring O’Shea Builders, download episode 10 from iTunes or Amazon or watch it as it airs on Friday, July 3 on HGTV. For more on O’Shea Builders, visit www.buildwithoshea.com or check them out on Facebook, Houzz, Yelp, Twitter or Linked In.
Posted by Michelle Libby at 5:36 PM No comments: