In 1991, Janet and Rodney Waterhouse weren’t looking for the next great adventure. Rodney was working part-time jobs and Janet worked at Saint Joseph’s College, when they decided to buy an old GMC bus in New York and drive it home to Windham.

“Rodney drove a bus for VIP and worked for Hood. We set up tours for our square dancing crew and loved both parts (scheduling trips and driving the bus),” said Janet. Now Janet sets up the business and Rodney drives the buses. Vacationland Tours has two buses now.

“We don’t want to be a big bus company, just to fill his retirement and have fun with it,” she said. “We don’t go out looking for a lot of business. We just want to be busy enough to make enough money.”

Janet is getting closer to retirement age herself, she said and would like to do more charter work and schedule trips like the one they have planned to Lancaster, Pennsylvania, August 13-16. She also plans many gambling trips to Connecticut, Hollywood Slots in Bangor and the Oxford Casino. Trips she’s looking forward to scheduling soon are to the Rockettes in New York City and Niagara Falls.

Janet works with special companies that help set up local tours for bus tour guests once they are in the area. “They find tours you’d never know about if it wasn’t for these companies,” Janet said.

On the Lancaster trip attendees will eat in an Amish home, stop at an Amish bakery and drive through a barn where free range cows wander in and out.

Most of the people on the tours are seniors and middle-aged. “There are a lot of walkers underneath our bus,” Janet said with a laugh. And, although the buses are not entirely handicapped accessible, Janet and Rodney do make accommodations when they can.

Running a bus tour company is not all fun and games. There are a lot of rules and regulations that must be followed, including carrying $5 million liability insurance per passenger. Vacationland Tours is also registered with the State of Maine and has to stop at all the Department of Transportation checkpoints. The buses are well-maintained with a mechanic on-staff. The company also has a part-time bus driver, Larry Sprague, who fills in or drives the second bus when needed.

“It can be pretty stressful. You always worry how it’s going,” Janet said, but follows that statement up knowing she has contingency plans at the ready should something happen.

“We want to do trips, meet people and make a little bit doing it,” she said.
To contact Vacationland Tours about upcoming trips or if a group needs a bus for a tour, email vacationlandtours@yahoo.com or call 207-892-8005.
Posted by Niels Mank at 2:35 PM No comments:

My name is Kelly Mank. I have been asked to write a business column for The Windham Eagle by some of our clients. I decided that as the publisher of this paper my ultimate goal is to help the Windham community and if my experiences, successes and failures can help people, then I would most definitely help. A little background on me… I grew up in an entrepreneurial family. I have Bachelor’s degree in business administration, an associate’s degree in business management, and a degree in photography. I live in Windham with my amazing husband, Niels, (for those of you know us, you know how amazing he is) and our four fabulous children. I live my life with a very positive outlook. Everything happens for a reason. What can we learn from it? And, how will this challenge make us stronger individuals? Enough about me…
What will this column be about?

Owning four local businesses and being very involved in this community, I definitely have had my learning experiences and continue to learn every day. I will choose one topic every week, probably give you a story that will make you laugh, and explain how we not only got through it, but grew from it as a business. If you are having challenges as a business owner please feel free to write questions to me at BusinessByKelly@TheWindhamEagle.com.
Being a business owner is not a 9-to-5 job. It is a lifestyle. I truly hope that I can help at least one person every month (or as needed by my editor) with one of the many rewarding challenges to entrepreneurship.
Posted by Niels Mank at 2:33 PM No comments: 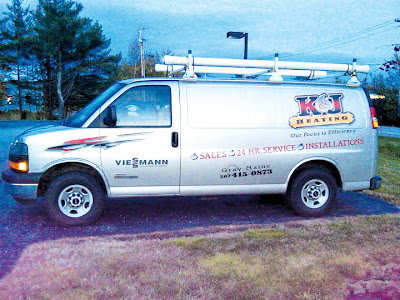 After 10 years as a Westbrook police officer, Ken Viger, decided to do something where he could make people happy.

“As a police officer you deal with people on their worst day. You call me up on Christmas Eve and you have no heat…I give you heat and you’re happy,” Viger said.

In 2005, he took the opportunity to go out on his own after having been licensed and spent time working with his father-in-law at his heating business.

“If you want to burn it, we’ll do it for you,” Viger said. K&J Heating works with oil, natural gas, propane gas, corn cobs, pellet boilers, cord wood and radiant heat. The only thing they don’t do is thermonuclear heat, which isn’t ready for household use, Viger joked.

“I love doing the work. Every day is something different. No two systems are alike,” he said.
Viger keeps busy year round with maintenance calls and new construction heating systems. He said he hasn’t had the traditional slow down in business for years.

K&J Heating, which has one employee, has done major upgrades for older buildings, including one in Lewiston where the owner changed to natural gas and got the return on his investment in one year. “One year he was paying $20,000 to heat a three-story building with oil. The first year after the new system was put in, he spent 15 percent of that,” said Viger.

Viger is trained, license and insured. The training he said, is self-motivated. He keeps up to date on new systems and then can offer more services to his customers.

K&J Heating is very through in all it does often checking the manual to make sure nothing has changed since the last install of that product, even if they’ve installed 50 to 100 of them.

K&J Heating is very supportive of local sports and Scouts. Viger coaches and has been a Cub Scout leader.